Back on the road following the phenomenal sell-out success of this year’s tour, the 2018 schedule is set to reach all four corners of the UK on this extensive tour.

Winning eleven international awards, including the 2015 Olivier Award for Best New Comedy and a 2017 Tony Award for its Broadway transfer, The Play That Goes Wrong continues to play to sold out houses in the West End, whilst enjoying its new status as Broadway’s longest running play. It is a remarkable rags-to-riches story for a play, which started its life at a London fringe venue with only four paying members of the public at the first performance, and has since played to an audience of almost one and a half million worldwide. This autumn The Play That Goes Wrong has been playing simultaneously in twelve countries. 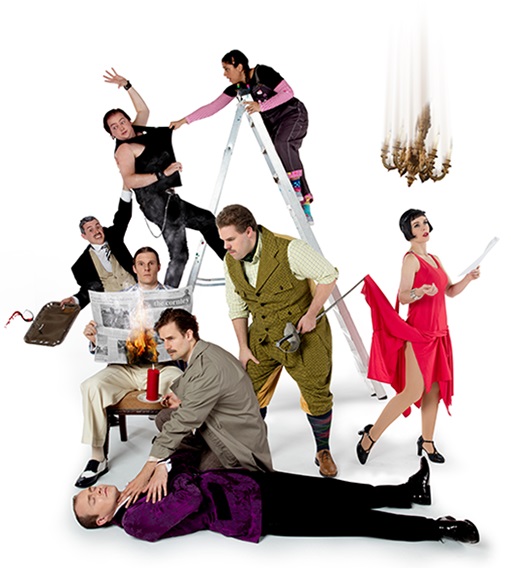 Co-written by Mischief Theatre company members Henry Lewis, Jonathan Sayer and Henry Shields, The Play That Goes Wrong is a highly physical comedy packed with finely-tuned farce and Buster Keaton inspired slapstick delivered with split-second timing and ambitious daring. The play introduces The ‘Cornley Polytechnic Drama Society’ who are attempting to put on a 1920s’ murder mystery, but as the title suggests, everything that can go wrong… does, as the accident prone thespians battle on against all the odds to get to their final curtain call.

“Why would all these regional theatres want a return visit of our little murder mystery show when last year’s tour went so badly wrong. I am at a loss to understand it." Producer, Kenny Wax

Mischief Theatre was founded in 2008 by a group of graduates of The London Academy of Music and Dramatic Art (LAMDA) and began as an improvised comedy group. Their other production The Comedy About A Bank Robbery is now booking into its third year in the West End at the Criterion Theatre and their new improv show Mischief Movie Night opens in the West End on 13 December at the Arts Theatre. In December 2016, Mischief made their TV debut on the BBC with Peter Pan Goes Wrong, starring David Suchet as the guest narrator. Peter Pan Goes Wrong (Olivier Award Nominee 2016) also enjoyed two sell-out West End seasons and a UK tour. Mischief returns to BBC One this Christmas with a brand new production, A Christmas Carol Goes Wrong, filmed in front of a live studio audience (transmission date to be announced). The company is led by Artistic Director Henry Lewis and Company Director Jonathan Sayer.

The Play That Goes Wrong is playing at numerous venues within the North West End region. For full details visit http://www.theplaythatgoeswrong.com/uk-tour/tickets