All Change at West Yorkshire Playhouse

West Yorkshire Playhouse has changed its name to Leeds Playhouse to mark a new chapter in the theatre’s 50 year history.

The long overdue name change is designed to embed the theatre at the heart of cultural life in the Leeds City Region, and echoes the original name of the Playhouse which first opened in 1970.

The Playhouse’s renaming comes at a tricky time for the organisation, as it embarks on a £16 million capital redevelopment project resulting in a new city-facing entrance, improved access into and around the building and the much needed opening of the Bramall Rock Void, a new third performance space within the foundations of the theatre.

“The Playhouse has been, and will continue to be, a theatre for everyone, a philosophy which was written into the DNA of the organisation over 50 years ago by the theatre’s founding members" says Leeds Playhouse Artistic Director James Brining.

"We remain as committed as we have always been to the audiences and communities who use this theatre. We love West Yorkshire, and for those familiar with the organisation we’re the same theatre in the same location we have been since moving to Quarry Hill in 1990. Changing our name to Leeds Playhouse is a progressive step forward for the organisation, reflecting and acknowledging our rich and fruitful history."

The Executive Board of Leeds City Council will meet on June 27th to approve the £15.8m development project and of that figure just under £800k is still needed.

To date the project has secured significant financial support from Arts Council England and Leeds City Council alongside major donations from The Liz & Terry Bramall Foundation, Principal Capital Partners Irwin Mitchell, SOYO Leeds and Moda as well as the Garfield Weston and Foyle Foundations, in addition to a contribution from the Playhouse’s own resources. A public fundraising campaign has been launched today to help achieve the final 7% of the target.

As the Playhouse’s main theatres will go dark during the development so from September the Leeds Playhouse will present a 2018/19 Pop-Up season.

This season will take place in the Pop-Up theatre, a temporary space built in a workshop on the existing Playhouse site, and in venues across the city and the wider Leeds City Region. The season features a broad range of modern classics, contemporary revivals and new commissions. The Pop-Up season is billed as vital and diverse stories of the here and now, speaking to Leeds and the wider North. 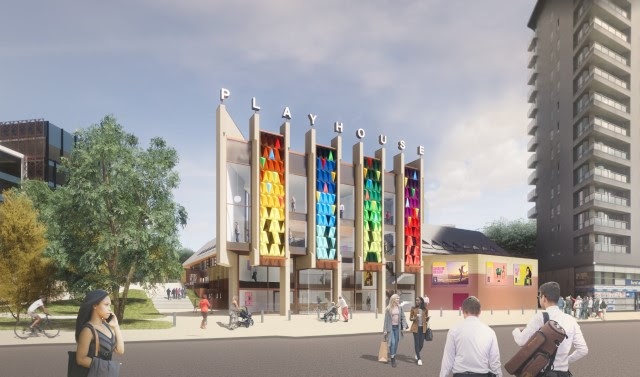 “Our season is made up of a wide variety of stories that interrogate Britain from a contemporary, largely Northern perspective, as well as through the lens of the past,” notes Leeds Playhouse Associate Director Amy Leach.

“We are delighted to welcome a superb ensemble of actors who will join us to realise much of this season, taking on a range of roles from Shakespeare to contemporary classics such as Jim Cartwright’s seminal play Road. We hope audiences will enjoy the thrill of seeing our acting company shape-shift between productions, and we can’t wait to share these vital stories with our audiences.”