Hope Mill Theatre in Manchester is to stage the UK theatrical premiere of the Broadway version of Rodgers + Hammerstein’s Cinderella in 2020.

Cinderella will be the first musical produced by A Factory of Creativity – the charity recently formed to take over the running of Hope Mill Theatre. Co-founders of Hope Mill Theatre Joseph Houston and William Whelton will direct and choreograph Cinderella, respectively.

The production will run at Hope Mill Theatre from Saturday 9th May to Saturday 6th June 2020 and then at Clonter Opera Theatre, Cheshire from Tuesday 9th to Sunday 14th June 2020. Tickets on sale soon.

Cinderella is the only musical written for the television by legendary duo Richard Rodgers & Oscar Hammerstein II (South Pacific, Carousel, The Sound of Music). Originally broadcast live in 1957 starring Julie Andrews, the broadcast was watched by more than 100 million people, before subsequently being remade for TV again in 1965 and 1997 (starring Whitney Houston). 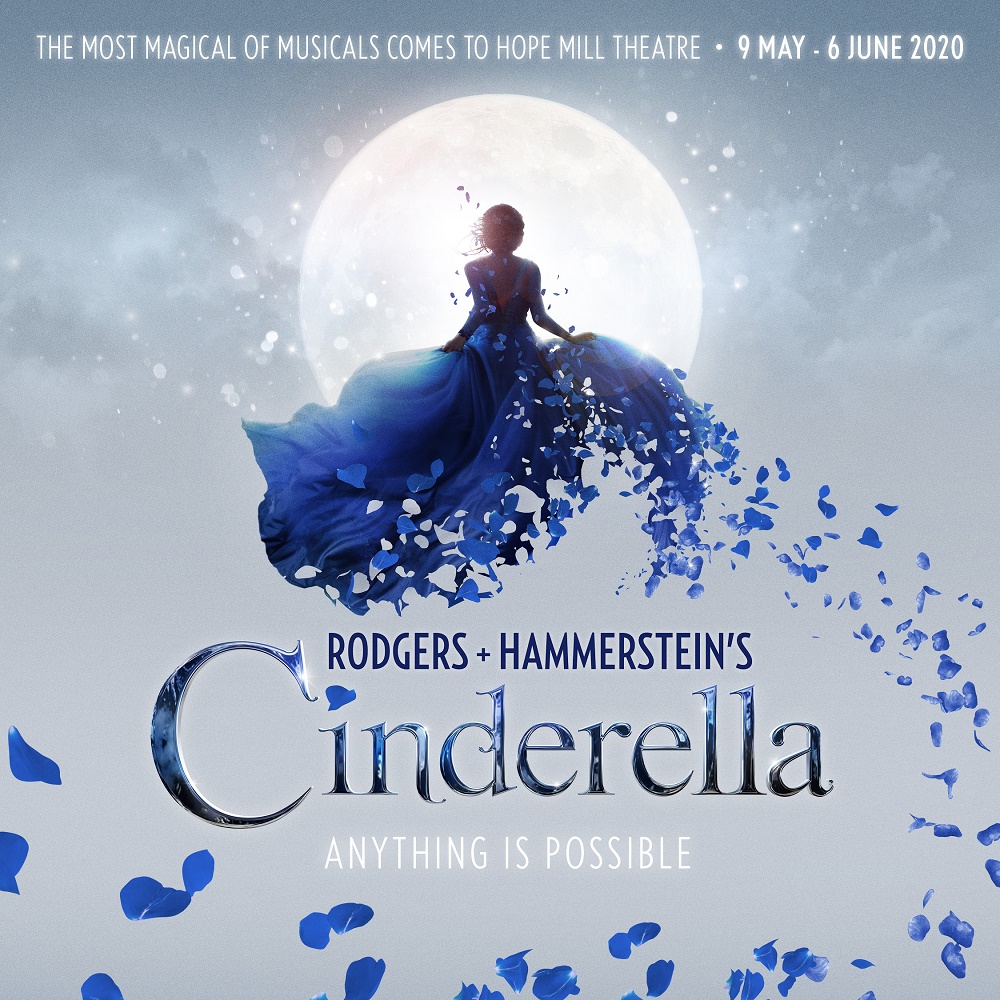 A new Broadway version with a Tony-nominated book by Douglas Carter Beane premiered in 2013 featuring several fresh characters and songs. The show features songs including “In My Own Little Corner”, “Impossible”, “Ten Minutes Ago” and “Stepsister’s Lament.”

This will be the first time a fully-staged version of the show has been performed in the UK (following a recent one-night concert version in London).

The smart and beautiful young Ella lives in the care of her wicked, self-absorbed stepmother Madame and her two stepsisters Charlotte and Gabrielle. In another part of the kingdom, Prince Topher is trying to find himself and learn his place in the world. When his scheming advisor Sebastian suggests throwing a ball so the Prince can meet potential brides, Ella and Topher’s different worlds come together. Expect the unexpected in this clever retelling of the beloved fairy tale.

Hope Mill Theatre will be holding open auditions in its search for the title role of Cinderella. The venue is committed to finding new and emerging talent across the regions and will be sharing details very soon of how to register interest in auditioning.

Ted Chapin, President of the Rodgers & Hammerstein Organization, said: “I am thrilled that the modern Broadway version of Rodgers + Hammerstein’s Cinderella will be getting its U.K. theatrical premiere at the Hope Mill Theatre in Manchester. Yes, the tale is tried-and-true, and yes, Ella of the Cinders has inspired many an adaptation, but there is only one time that the great team of Rodgers and Hammerstein put her squarely in their focus - and it took many years after the U.S. television premiere to find a proper theatrical footing. When this version opened on Broadway in 2013, its tagline was “Glass slippers are so back.” With a wink to the Cinderella traditions of the past – except pantos! – and a solid foot in a world where people take more control over their own lives, Rodgers + Hammerstein’s Cinderella has already charmed new generations of musical theater enthusiasts.”

Joseph Houston, Artistic Director, said: “The first ever show I watched as a boy was the story of Cinderella and so to be able to work on the UK premiere of the most recent Broadway version of Rodgers & Hammerstein’s story is a dream come true. Having the opportunity to also collaborate alongside Will, who is both my business partner and life partner – and of whose work I have long admired – makes this journey even more special. I want this unique version of Cinderella to captivate audiences young and old, just as the timeless story did for me. This is the perfect spring treat and I cannot wait to see this story come to life at Hope Mill Theatre.”

William Whelton, Executive Director and Choreographer, said: “For many years I have wanted to produce Rodgers + Hammerstein’s Cinderella, so for this to be the first musical to be brought to life by Hope Mill Theatre’s new charity is very special. It is a more modern take on the classic fairy tale that everyone is familiar with, add to the story the musical and lyrical genius of Rodgers & Hammerstein and you have real musical theatre magic. We are also thrilled to announce that as part of our casting process we will be holding open auditions in our search for Cinderella. As a regional venue we are passionate about finding and nurturing professional talent from all over the country so find this really exciting and we can’t wait to meet new artists.”