Beats & Elements and Camden People's Theatre’s 2015 production of No Milk for the Foxes is released online from Tuesday, 16th June.

It revolves around Marx, a white working-class male from Croydon, and Anglo-Indian Spaxx from Mitcham. They are two security guards on a one-night shift surviving on zero hours contracts.

The piece poses the question - is it important to aspire to a higher station or better just to accept your lot? 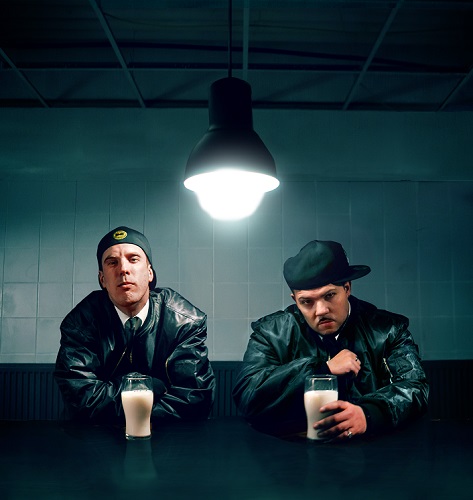 As the television monitors buzz in front of them, two friends pass the night shift debating status, class, and milk. Marx is keeping his head down, working hard and praying his contract will be extended. He is saving up to take his girlfriend Gemma on her dream holiday to Tenerife. Sparx just cannot wait to clock off and roll a spliff. Minimum wage with no pension? He has had enough. Today he is leaving. Quitting. Definitely. Although, he said that yesterday.

As working-class artists themselves, the creators want to challenge representations of class on the modern stage and bring humour and humility to their audiences.

“The show is a hip-hop tragicomedy about class, about the inequalities in society," says musician, rapper and theatre maker Conrad Murray. “We meet two working class guys working the night shift in Croydon on zero hours contracts. From the outside, it is seeming like they are a couple of entitled losers, possibly lazy. But as we go on, we realise that they are products of their generation.

"We made the show five years ago, on the eve of David Cameron’s Tories winning the election. The reception from the audience was amazing. During the original run we had many people come up to us to say it inspired them, and even changed their way of thinking about class and theatre."

London-based Beats & Elements are made up of Conrad Murray - who directed the acclaimed BAC Beatboxing Academy production of Frankenstein: How To Make a Monster and composed the soundtrack to the recent acclaimed Pilot Theatre production of Crongton Knights - and storyteller, poet, rapper and theatre-maker, Paul Cree, whose credits include performing around the UK at festivals and events, such as Bestival, Latitude, Secret Garden Party, One Taste and Edinburgh Fringe.

The 2015 production was co-produced with Camden People's Theatre and with the award-winning dramaturgs, Yael Shavit and Tom Parkinson.

No Milk for the Foxes is available HERE.