I’ve got to be honest: dance shows have never really been my thing. Especially contemporary dance…to my untrained, philistine eye I’ve always found it a little flail-y and opaque – too much arty swooshing around and not enough substance.

I’m not proud to have held such dismissive and rigid views; so I’m really pleased to say that two shows, in quick succession, have totally challenged my viewpoint and opened my eyes: to the immense creative potential of dance as an art-form and to its power to enthral, entrance and excite.

Akram Khan’s Chotto Desh at The Lowry was the first show to come gently knocking on the door of my stubbornly-held preconceptions; now Peeping Tom’s 32 Rue Vandenbranden has hurtled through like a hurricane and gleefully smashed everything up.

This production is, quite simply, bonkers.

The setting is grounded in reality, with two caravans – reassuring in their easily recognisable, everyday solidity – facing off against one another in a harsh, wintry environment.

In and out of this snowscape traverse the six performers, whose characters take their real names. We snatch at their lives through windows, witnessing their personal pain and private anguish. Their stories intertwine at points, with little threads of continuity for us plot-lovers to grasp at and desperately hold on to as the madness descends – e.g. the ups and downs of a young couple in love; the pain and isolation when that love is unrequited. 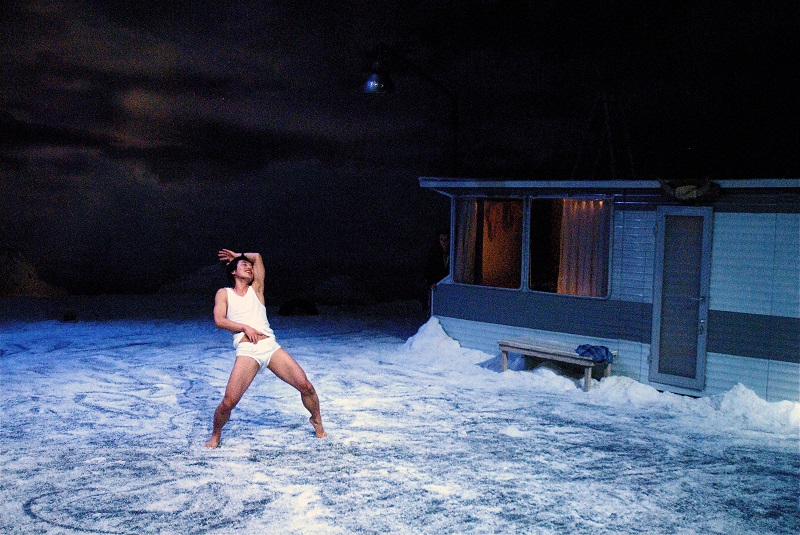 But there are equally moments of complete disjunction and bafflement: a snow fight that culminates in two men suckling at the bosom of Eurudike de Beul’s watchful matriarch; the arrival of an unseen and unexplained threat which causes Jos Baker’s character to tell everyone to go back inside; Hun-Mok Jung’s character getting down with his bad self (look at the promo pictures – yes, he has his hand down his pants) interrupted by three wandering skiers.

It is part David Lynch, part Alfred Hitchcock…part Björk, part Laurel and Hardy. Slapstick is as effectively utilised as horror, with abrupt 180 degree tonal shifts from laugh-out-loud visual gags (people falling over and running into things: somehow it never gets old) to the realms of visceral, seat-shaking nightmare, à la Poltergeist or The Exorcist.

The music, unsurprisingly, is equally eclectic, veering from soaring arias to Pink Floyd to K-Pop (in one of the show’s funniest scenes, with Jung and de Beul engaging in a mano-a-mano karaoke showdown).

Both movement and staging are also well-utilised to bring little bits of magic to life: a creepy Marie Gyselbrecht disappearing into thin air through the wall of her neighbour’s caravan; Seoljin Kim manipulating his umbrella and his movement to simulate a raging storm; Maria Carolina Vieira effecting the quickest costume changes I’ve ever seen as she tries to find an outfit that wins her partner’s approval.

It’s a real testament to the creative team, Gabriela Carrizo and Franck Chartier that one production can draw belly laughs from its audience in one moment and awed silence the next. Towards the end, Seoljin Kim’s dance solo evokes the utter deflation of rejection and heart-break as his own features and limbs sag and contort into a shapeless, defeated heap; and you feel, through watching him, what it feels to be nothing.

It is bonkers….but also a little bit brilliant.