Annie Horniman was a revolutionary force in Northern theatre.   I'm ashamed to say that until I did some research about this play, I had never heard of her so I wasn’t entirely sure what to expect from this production.

There is a simple set of table and chairs, a lamp and some screens. Miss Horniman (played wonderfully by Victoria Gotham) takes her seat shortly before the play begins and it appears she is watching a small portable television incredulously.   Something of an anachronism, given that she died in 1937 but she is providing us with an overview of her life and all that has happened in northern theatre since she died.   In her words "you don't let something like death get in the way!"

The play begins to the strains of Coronation Street and Miss Horniman, rather bemusedly, berates the use of language "and all that kissing...they were both boys!"

We learn from the lady herself that she was born on 3 October 1860 and her grandfather was the founder of Hornimans tea - again, something I'm ashamed to say I had not heard of.   He left her £40,000 when he died - the equivalent today of £3 million - and with it, she took a lease of the Abbey Theatre in Dublin because she was "in love with theatre".   However, this did not work out for her so she came to Manchester and eventually bought the Gaiety Theatre. She chose Manchester because it was the centre of the industrial world, it had its own stock exchange and newspaper!

We then saw the first of many excerpts from plays that Miss Horniman was involved with as they were performed at the Gaiety.   These were all very northern and full of social history.   The standard of the acting was fantastic - the actors all had such gusto and energy, not to mention very strong northern accents which were sometimes used to great comic effect.

Miss Horniman was certainly a feminist - when one of her actresses was set upon and berated in the street (by another woman, it should be noted!) and called a "whore" because of a questionable scene she had performed in, Miss Horniman was the one who encouraged her to carry on regardless.

Sadly in 1921, the Gaiety Theatre was sold and Miss Horniman toured around the country giving lectures.

She even talked us through her own death - at this point some very simple, yet effective lighting was used.

The "clips" continued and we moved from "The Dear Departed" to "Love on the Dole".   I did think that the "Love on the Dole" excerpt was a little too long and ran the risk of losing the audience's interest, I'm not sure it was the best choice of scene to use.   Another observation I would make is that some of the plays which were used are probably not known very well today, if at all and although they were superbly acted, some were not as engaging as others.

We then moved to some more recognisable and well known pieces, such as "A Taste of Honey" and "A Kind of Loving".   The scene from "The Rise and Fall of Little Voice" was excellent, the part of Brenda Blethyn superbly and enthusiastically (and raucously!) played by Lianne Beasley. She was hilarious!

Finally we ventured into television with excerpts from "Cracker" and "Shameless". All good northern stuff, although I found the scene from Cracker a little strange as the part of Fitz appeared to be played by two different people...nothing wrong with that but I would think that anyone who wasn't familiar with the programme would have been a little confused.

Miss Horniman kept a watchful eye over all the proceedings, bringing us fully up-to-date at the end with mention of "Cucumber" and even Media City and Home, Manchester's newest arts venue. She brought proceedings to a close by stating that outside London, Manchester should be the centre of great writing and she thanked everyone for taking tea with her. (In fact, as a thank you, all audience members were given a Hornimans wrapped tea bag on the way out).

All the actors are to be congratulated on their performance tonight.   It was entertaining from start to finish.

I came away from this play feeling proud to be northern and even prouder of northern theatre.   Plus I got a free tea bag - what's not to like?! 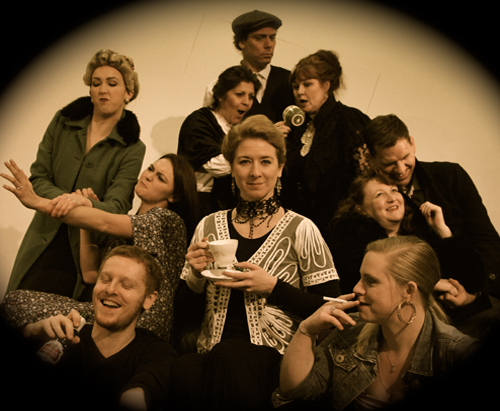