The Art Of Success - HOME, Manchester

When I was offered the chance to go along to see another production by students of The Manchester School Of Theatre, and realising that the cast would include some from my previous experience of seeing them in The Country Wife, I literally jumped at the opportunity.

The Country Wife was very good; The Art Of Success was quite remarkable.

It is a play I had never heard of before and knew nothing about before going last night, and so have now added another play and playwright to my mental arsenal.

The play is set in the early part of the 18th century in London. King George II is on the throne, and Walpole, generally considered Britain's first and longest serving Prime Minister is in office; and despite the programme note advising us that Nick Dear, the writer of the play, cared more about writing a good story than historical accuracy, certain things certainly remained in order to keep the play's narrative secure.

The play centres around William Hogarth, one of England's foremost painters and credited as introducing the world to what has become known as 'Sequential Art' or artworks which form a series as in a cartoon strip. A highly influential man of his day, and despite his father's imprisonment, married well and lived among the higher echelons of society. And thanks to the newly introduced Copyright Act, Hogarth was probably the first artist to able to support himself without the need of sponsor or patronage.

However, the play doesn't really concern itself as much with his paintings as it does with his sexual desires and depravities; sexual and political manipulation and corruption, and the treatment and general regarding of women. It is a bawdy and highly sexually charged play, with simulated sex scenes, semi and actual nudity, and deals with themes that on screen would award it an automatic 18 Cert. And yet this was a play performed by students who themselves cannot be much older than 18. It was therefore a very brave choice of play, and a very difficult one too. So how did they cope? Quite simply magnificently. 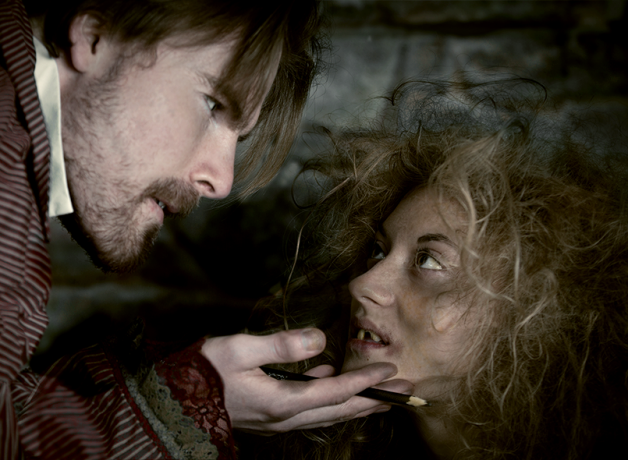 In this production, directed by course tutor and departmental head, David Shirley, we saw Johnny Byron take on the protagonist Hogarth with vim and vigour. His mental battle between his love and respect of his wife and his carnal desires wonderfully balanced, and his understanding of turning his art and his gift into financial gain well placed. A high-octane performance which paid dividends.

The strong and well chosen cast included some sterling and beautifully interpreted performances. Dramatist Henry Fielding was played with passion by Jerome Dowling; Hogarth's goodly wife with hidden carnal desire was given a real and human touch by Harriet Poole. Just such a real shame that in her quieter moments she became inaudible. I really enjoyed the smaller but nonetheless pivotal roles of Oliver (Lewis Frazer); Mrs. Needham - {are we harping back here to the style of comedy which gives characters the names of their traits??} (Gina Fillingham), and Queen Caroline, complete with authentic sounding accent. (Bryony Miller).

The undoubted 'star' of this play though was Laura Ferries playing the murderess Sarah Sprackling. A wonderful role, so full of emotion and depth, played with lust and great sensitivity. Her stoic, almost angelic acknowledgment of her impending death and choosing to die was a tiny tear-jerk moment.

The directing was strong, powerful, allowing the characters to have their moments of comedy - which were all excellently placed and all gained the requisite laugh - and the moments of higher tension brought out wonderfully. I liked mostly everything Shirley did and was following him all the way; that is until it came to the final few pages of script. Sarah's hanging silhouette did not last long enough for us to really recognise and appreciate what was happening, and so consequently didn't really have the impact I think you would have wanted it to have had; and sadly, the futuristic nightmare scene just lost it for me. It was so out-of-place and so unexpected, and basically, oh so wrong.

Costumes and especially make-up were excellent, as indeed the set design and set items were too. (Olivia Du Monceau and Sheila Johnson). I liked the omnipresent larger-than-life picture frames with small additions for each scene. The final scene before the epilogue, in Hogarth's studio, was perhaps just a little too busy in comparison with the rest. But maybe I am being just a little picky there! Also, so sorry to be the pedant here, but the two pictures of Hogarth which were on display in that studio were painted after this play finishes! The dialogue in the play itself states 1730, and these two painting were 1741 and 1755. It's a very small detail I know, but since everything else in the set and costume was authentic, and we need it to be authentic in order to believe in the fanciful and nefarious goings on of the characters peopling it, it just irritated me slightly.

The one thing to let this production down more than anything though was the lighting. Every scene, no matter where or when the scene was taking place was covered in the same straw warm wash. Surely a dank and dark prison cell would require a colder steel effect. Inside and outside should have been treated differently, as should day and night. But again, this is a technical problem, so let me return to the acting - the students - for this is THEIR showcase, and as such they were superb. Once again proving unequivocally that The Manchester School Of Theatre fosters a hotbed of talent and I feel sure that some of the names above will be seen in the theatres and on the screens of England for a long time to come!