My friends and family raised their eyebrows when I told them that tonight I would be reviewing Sex With A Stranger – I had to explain that it was a play...!

The promotional narrative for this production doesn't really do it any favours and certainly didn't make me feel interested or particularly excited about seeing it...the description makes it sound incredibly bleak and desolate: "...a cheerless morass of uncertainty, boredom, loneliness and empty lust".   However, it actually is about this but it is a lot more entertaining than it sounds, honestly.

I can't say a great deal about the storyline without giving away spoilers that would ruin the clever use of flashbacks and overlapping scenes but I will say that really, this play should be viewed twice as it would be interesting to watch it again with the knowledge that you gain by the end of watching it the first time.   The actual story – if told in chronological order – wouldn't be a fraction as effective as it is because it is told in flashback.   Certain elements of it have much more impact because of the fact that we don't see it from A to B. 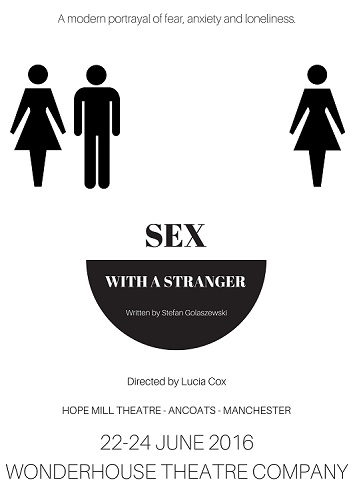 Basically, this is a play about relationships.   We encounter a couple who have just met at a nightclub and are clearly on their way to a one night stand. We then encounter another couple who are in an established relationship. Both are fraught with awkwardness, mistrust and vulnerability.   The writing seems to go out of its way to emphasise the awkwardness and uncertainty of the new relationship and also the mundanity of the long-term relationship.   The awkwardness was astutely observed but rather over-emphasised at times to the point of overdoing it, with some repetitiveness.   However, the point was well made and we were left in no doubt about the uncomfortableness between the couple – however, this didn't stop their determination to take the evening to its ultimate conclusion.

An observation I would make is that some scenes are overly long and nothing actually happens in them – I understand that a point is being made here and having seen the whole play, it makes more sense but it's still a little too much and almost making the point with a sledgehammer when it doesn't need to be spelled out quite so much.

There were frequent blackouts and this was in the main, very effective. The actors changed their positions on stage each time this happened and I liked this. The set was minimal but worked well (some white wooden seating blocks which were rearranged from time to time) so there needed to be something to define the change of scene and the blackout was a simple yet effective way of achieving this. However, sometimes I thought it was a little unnecessary as there was a few blackouts during a scene so nothing had changed. Less is more!

The quality of the acting was excellent.   The emotions were portrayed convincingly and I particularly thought that Adam (David Gregan-Jones) really did a fantastic job in his role because my perception of him completely changed as the story unfolded and he was almost a Jekyll and Hyde character by the end.   I thought this was good writing and good acting: it was believable and a little shocking at times.

Grace (Jade Golding) and Ruth (Charlotte Tyree) were also extremely convincing in their roles, evoking pathos, humour and sympathy. Grace had most of the humorous lines and she did these very well.

This is a very well written and well observed play.   I particularly liked the scenes which showed Adam and Ruth on their first date which were cleverly juxtapositioned with scenes showing how they are with each other now – Adam being aggressive and bullying and Ruth being insecure and paranoid. The acting switched from one extreme to another in seconds and this was very skilfully done by both Tyree and Gregan-Jones.

Hope Mill Theatre is a spectacular venue.   Whatever is shown here, you are up close to the action and that makes everything so much more real and more of an experience.   It was well chosen for this production which may not work quite as well in a larger, less intimate venue.

The play runs for approximately eighty minutes and there is no interval.   It's on at the lovely Hope Mill Theatre until 24 June so...pause for predictable smutty pun...if you want some Sex With A Stranger, Hope Mill is the place to get it.