I am certainly no fan of the modernisation or relocation of Shakespeare plays. No other dramatist in our history has ever been so refashioned. Why do directors and theatre producers alike think that when they come to Shakespeare they have licence to set the play in any era using any costume, even changing the language and editing the text accordingly. Indeed, this is now seen as de rigeur and no self-respecting theatre company would ever think of setting a Shakespeare play in its original and intended context! No-one would be able to get away with such bastardisations of any other playwright, so why Shakespeare?

So, when I took my seat and saw that the set was contemporary and the cast entered in modern dress my heart sank.

However, of all Shakespeare's plays, The Winter's Tale is probably the most adaptable. Yes, the language is still archaic, and The Oracles of Delphi are somewhat old hat too, but if you are going to update any Shakespeare then this is the one to choose. Shakespeare himself gives no time to this play, and sets it in two "mythical" kingdoms. Despite being given names of places that do actually exist, these places cannot be where they are in reality. Bohemia is given a coast and the journey between the two is a perilous one by sea. So already we are in the realms of fantasy, and therefore adaptability and pliability.

The biggest problem with this play, as directors have lamented over the years, is that it is very much a game of two halves. The first act is undoubtedly tragic, whilst the second act owes much more to Shakespeare's comedic writings as found in Midsummer Night's Dream etc. And then in the very short and final third act, we see the two brought together through pathos, and yes, for a change, we are in for a happy ending!

It is much to the director's credit then that the three acts were treated as separate entities. Since the second act is set 16 years after the first and also in a different country, why shouldn't there be a complete change of mood.

But this was a very curate's egg-ish production. There were moments of sheer brilliance and truly inspirational theatre, but sadly these were only moments in an otherwise rather lifeless production.

Northern Broadsides are famed first and foremost for their northern accented productions; but to have all the cast speaking in a variety of northern accents for no real apparent reason except that that is part of the company's ethos didn't really make any sense to me. In this play there are very clearly four (or two) divisions.... Sicilian royalty, Sicilian hoi polloi, Bohemian royalty, Bohemian hoi polloi. Admittedly the royalty are brothers, so similar accents could be acceptable... but no such division in accents was discernible.

However, the other claim to fame of this company, that of being multi-talented as actor-musicians, was evident in no small measure. They proved this during Act 2, all playing live on stage a variety of instruments from modern percussion to traditional instruments normally associated with orchestras. And their rendition of a modern plainchant behind Hermione's statue in Act three was simply breathtaking.

The play starts well. A good pace is set by the New Year's Eve revelling and the New Year Chimes.. But the pace quickly becomes slower and more drawn out as the play progresses. The simple set design, minimalist and stark, designed by Dawn Allsopp, lit with steel gave this first act a very foreboding, bleak and barren feel. Even the costumes, which were in the majority, black..[Perhaps a comedic nod to our perception of the mafia boss; indeed all that Leontes needed to complete this image was a pair of dark glasses, but thankfully, the costume department didn't go so far!]... helped to create this mood.

The pace was only lifted at the start of Act 2 when now we see the same set lit with straw and a few simple additions of baskets, hessian sacks and wooden pallets to brighten the atmosphere. The costumes are changed too... whites and brighter, but simple colours. This was very effective.

It is during Act 2 that we are allowed to see the company at their most versatile and watch them sing and dance their way through various music styles including a barn dance, an Irish jig and a heavily comedic but excellently rendered, "Swear It More to Me".

Northern Broadsides are also famed for their clarity of narrative. Being able to make even the most convoluted and difficult of texts seem fresh and easily understandable to all. Interestingly, this is foremost in our director's mind as he "hopes to allow the audience to hear with clarity the narrative of the text". And indeed, in this mission, he succeeded. In The Winter's Tale the story is not really too difficult to follow. The two Kings, who are also brothers, are celebrating together. One king sees his wife with his brother and becomes uncontrollably and unjustifiably jealous. So jealous in fact that he asks his consort to murder his brother and throws his wife into prison. But it doesn't just end there. His consort sees fit to attach himself to the brother and make good his escape, and his wife bears a daughter whilst in prison which he orders to be cast away on the most desolate shore and be left to the fates. Of course, over time, he rues these rashnesses and of course too, for this is Shakespeare, the girl grows up and falls in love with none other than the King's brother's son. They plan to marry, but naturally this is forbidden and so they escape to sea, travelling back to Sicilia in the hope of gaining the King's favour. What could possibly go wrong?

Leontes was played by Conrad Nelson, who also composed the music and directed the play. Quite an undertaking. It is always immensely difficult for anyone to direct themselves; especially in live theatre where you don't have the luxury of being able to watch the rushes and retake a scene. A very brave move then. One which, for my money at least, didn't quite pay off. The directing was very stilted and emotionless. It was almost like watching a series of photographs. The placing of the cast seemed to be paramount. There was always a good "photo opportunity", but this gave rise to some rather unnatural and contrived movements by the cast, who somehow sensed that they were being watched and therefore had to behave. Their emotions were not allowed to be given full reign, and so, especially in the first act, rather than feeling genuinely sorry and being able to sympathise with Hermione's plight, we were struck by how little true emotion was emanating from the cast. It was only in the final scene when the Sicilian royal family are reunited that there is some evidence of real emotion... but it is too little too late I fear.

Even in the second act when everyone should have been shouting and singing with emotions high and joyous, it was all very refined and restrained, and always making sure they sat or stood in the correct position to complete the photo album! The whole thing felt extremely restrained, contrived, measured and "stagey". The directing got in the way of the acting. This was indeed a strong and talented cast which were being held back by an unseen force. Such a shame.

For my money, the most honest and natural acting, and the most enjoyable to watch were the Old Shepherd and his son, played respectively by Russell Richardson and Adam Barlow. They were both truthful and amusing; a real pleasure to watch them spark off each other. Camillo too, played by Andy Cryer, is worth mentioning. A sincere performance of a part which is so often overlooked and overshadowed by he two kings.

This production of The Winter's Tale is touring theatres in Lancashire and Yorkshire returning to its home town of Halifax for the final leg of the tour, ending on the 28 November. Let's hope that, as my old drama teacher used to say, the play develops some "oomph" before its next airing. 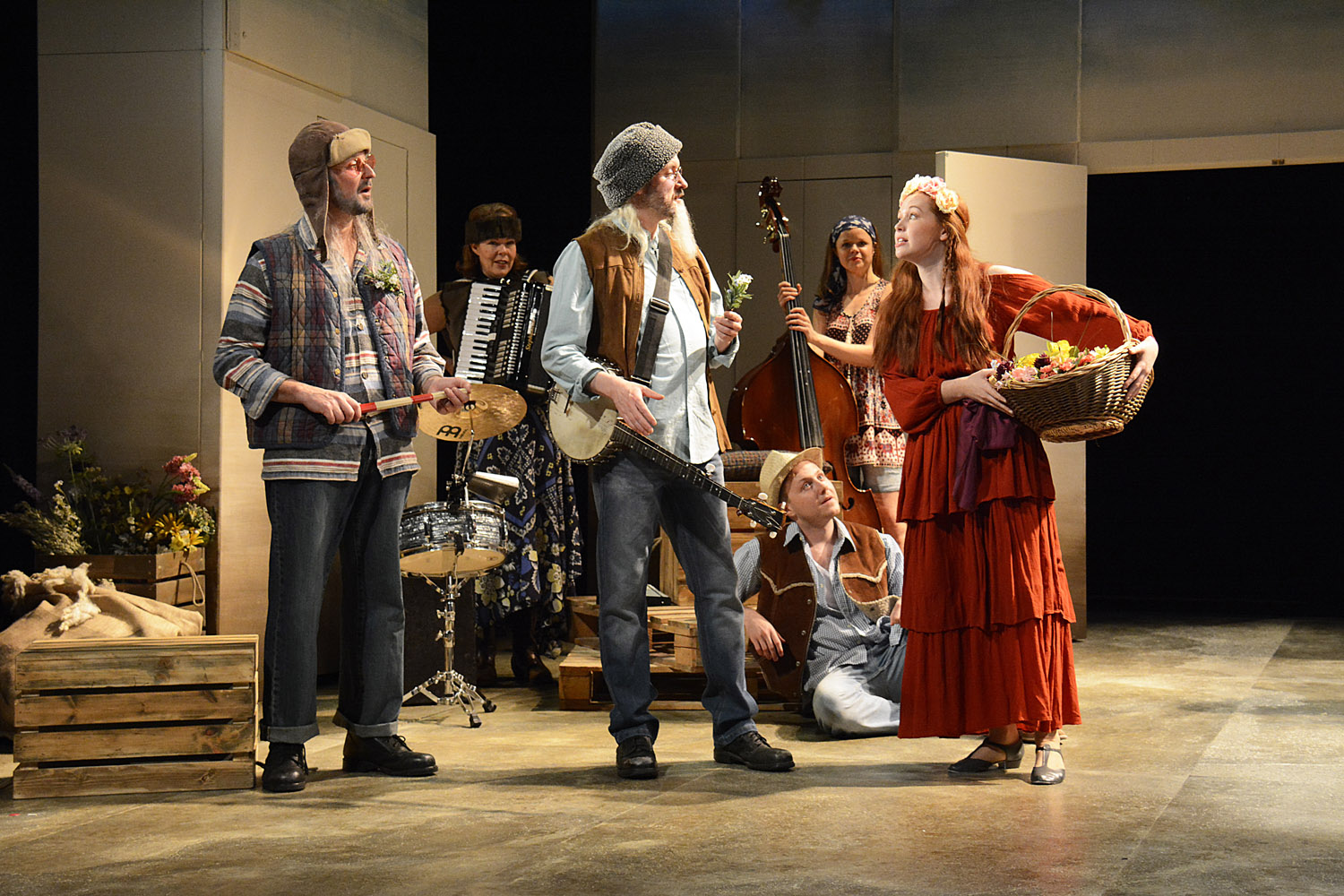