I have to admit to a first here. It is the first time I have seen this ballet, and was surprised also, that for such a famous and popular work, I didn't recognise any of the music either. A huge cultural omission which was last night rectified.

The ballet is advertised as 'the most beautiful of all romantic ballets', and was presented by students of The Northern Ballet School housed at The Dancehouse Theatre in Manchester. The company, calling themselves Manchester City Ballet, comprises students from all three of the school's years and has an age range from 16 - 21.

One thing that always continues to surprise and impress me is the amount of young talent on display within Greater Manchester. No matter what the discipline, I am consistently impressed by the vitality, energy, commitment and indeed utter talent displayed by today's young and in-training performers. And tonight was no exception.

I also had to have a real chuckle to myself last night too, since I can only name two famous male ballet dancers, and on stage in front of me were their younger reincarnations!! A young Rudolf Nureyev look-alike and a Wayne Sleep from his curly-haired days!! (Dancers Miguel Cardosa and Carlos Filipe-Oliviera).

Let's get back on track though now! The story. If any of you don't know it, and I didn't, then it is really two stories. Act 1 is full of characters and chorus; villagers and noblemen milling around the stage, and in the midst of all of this Duke Albrecht of Silesia decides to flirt with a young peasant girl named Giselle before his intended marriage to Princess Bathilde. What he didn't count on was that Giselle would fall madly in love with him, and he in love with her. There is also a rival for Giselle's affections in the form of Hilarion, a gamekeeper, who tries to warn Giselle of the dangers of falling in love with an already betrothed Prince, but, to no use because she dances herself to death and at the end of the act we are left with both suitors mourning her senseless and avoidable demise. 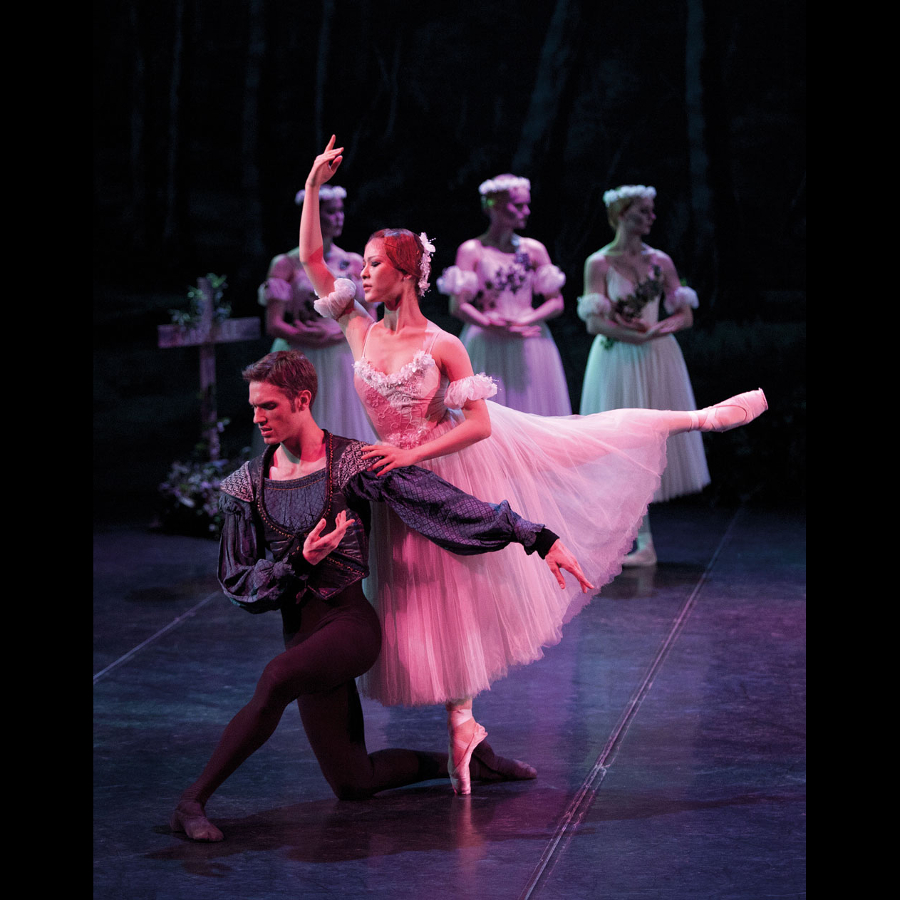 I mention that it is really two stories for the simple reason that both acts could be taken separately since the connection between them is tenuous. Act 2 is the grave side of Giselle in the woods. None of the merriment and colour from the first act remain. All the villagers and chorus have disappeared. This is a true Romantic vision in which this glade is haunted by The Wilis. These are young dead maidens who were jilted by their betrothed in life and so in death they wreak revenge on all men by making them dance to death. The Wilis have two lead dancers or ‘Attendants’ and a Queen. The only characters to make it to both acts being Giselle and her two suitors. Giselle dances, The Wilis dance, Albrecht enters and he dances, then he and Giselle dance, then he and Giselle and The Wilis dance, then Hilarion enters and he dances...and so on ad infinitum until finally The Wilis retreat back to their graves unable to make Giselle one of them because of her purity of heart, and Albrecht is taken away by his manservant giving one last mournful look at the grave at Giselle now resting in peace as the curtain closes.

In my amateur opinion, then I really thought the dancing was superb. The amount of training and skill that must go into even the simplest of moves to make ballet look as it should, sublime, effortless and beautiful is beyond my comprehension. Beauty and grace being watchwords of this art-form, then the second act in particular, had these ingredients in heaps! I am in no way qualified to comment on the actual skill of the dancing; my own dance training and education taking me on a completely different path and into Musical Theatre, I am merely an audience member looking for entertainment and enjoyment, and to perhaps be educated a little in an art-form which I know little about. All I can do is take my hat off to each and every one of you on stage last night, you all deserve huge congratulations.

If I have to be honest then the second act appealed to me more than the first. It was more what one expected a classical ballet to be, and the dancing from all of second act cast was absolutely lovely. I particularly liked Hilarion's dance with The Wilis, and the wonderful shapes and patterns given to the choreography of The Wilis in general.

And the Peasant pas-de-deux was my Act 1 highlight.

As I have already said, this was a stunning production, and bearing in mind their tender ages and experience, it made it all the more worthwhile. However, I should give special mention to the principals whom I have thus far not mentioned by name.

Yukiho Kasai was Giselle; Carlos Filipe-Oliviera was Albrecht, Miguel Cardosa was Hilarion and Sayaka Sugimoto was The Wilis Queen.

I hope one day I will see at least one of these names in lights!

Thank you all for broadening my education and theatrical horizons!