Hundreds of empty beer and wine glasses hang from the ceiling in Ciaran Bagnall’s set design, foreshadowing some of the tales to be told during the evening. Underneath, a fussy carpet and wooden bar, a typical northern pub.

Beginning the night with the landlord and landlady serving quick paced drinks as they perform their nightly routine of serving the customers; with bickering, smiles for the locals and a free drink for a loved up couple thrown in for good measure. The classic ‘old married couple’ seems the norm, however, Jim Cartwright does what he does best and turns the mundane into the riveting.

As our main duo’s story unfolds we also see a handful of different characters along the way. In this two hander, actors Katy Cavanagh and Colin Connor play all the roles between them, with such ease and attention to detail. From Connor flirting with the women in the front row as the Liverpudlian ladies’ man to Cavanagh’s drinker who comes to the pub just so she can watch TV. Every character is crafted with so many layers and each one leaves you wanting to know more about where they came from, where they’re going and what their life is like outside the local pub. After laughing our way through the majority of the play, only nervous giggles and then complete silence was left as we are introduced to Roy and Lesley. Roy controls his partner, intimidating her by asking questions about other men and threatening her when she doesn’t give the answer he wanted. A truly tense scene and expertly performed. 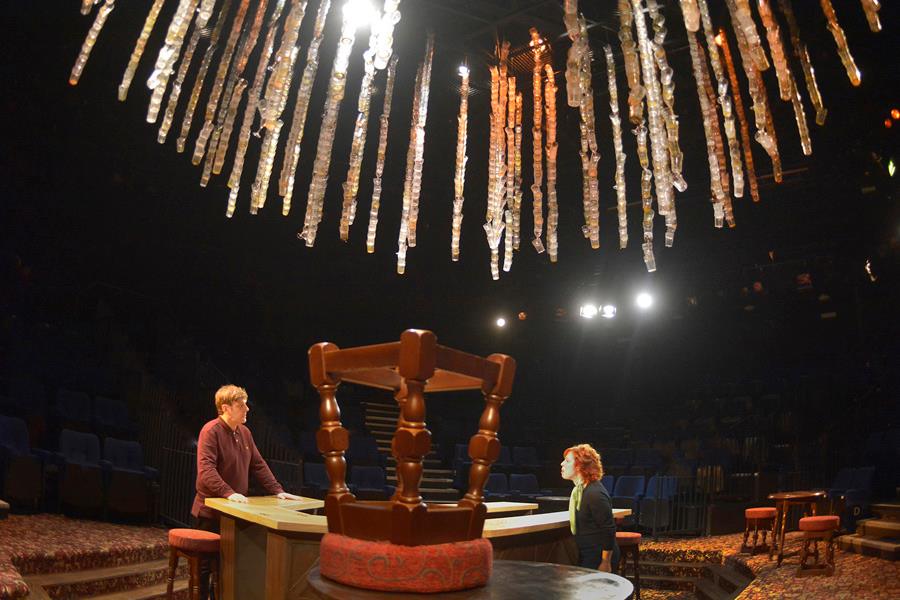 The favourite character of the night would have to be Mr Iger. The audience was in stiches after Mrs Iger delivers a monologue confessing her love for ‘big men’ and Mr Iger appears in the corridor; a contradiction to everything she wants. Connor has become an introverted, trench wearing, nervous, shell of a man. His shuffling, Mr Bean like steps, along with his glasses and slicked down hair had me crying with laughter without even uttering a word.

The snippets into the lives of the locals were interspersed with the returning couple of the landlady and landlord. As the play goes on their bickering turns into smashed glasses and threats of a physical fight emerge. The play culminates with a heart wrenching, guttural release of emotion from Cavanagh, unlike any I have heard in the theatre, shaking the audience to its core. During the climax of the play, the reason behind the couples distant nature and constant attack on each other is finally revealed. Connor’s vulnerability and ability to portray his emotions but seemingly trying to hold it together was incredible and Cavanagh’s constant pushing to get to know her answer is emotionally draining in the best way.

This is the funniest, saddest, most northern play I have seen for a long time and if you don’t see it you are missing out! The humour is undoubtedly northern throughout, wicked one liners with bitter undertones, filled with joy that’s been pulled out of somewhere in this dismal place. Although it was written over twenty years ago the stories of everyday life; the joys and struggles are still relevant today. Cartwright is able to find the everyday human voice that allows his plays to still be relevant even though decades have passed.