Uncertain times provide opportunity and here was one as we get to delight again in 2009’s unique joint venture between the Royal Opera and the Royal Ballet with this production of Handel’s baroque masterpiece with English libretto, choreographed and directed by Wayne McGregor, which matches singers and dancers in parallel roles, and was presented at the time as a double bill with Purcell’s Dido and Aeneas.

The curtain goes up to nymphs and shepherds in tan body stockings enjoying the pleasures of the plain as we meet the semi-divine nymph, Galatea (Danielle de Niese / Lauren Cuthbertson) and learn of her love for the shepherd Acis (Charles Workman / Edward Watson), though they are counselled by Acis’ close friend Damon (Paul Agnew / Steven McRae) as they pursue each other. The act closes with a duet by the young lovers which is echoed by a chorus, reflecting the pastoral and sensual mood of the scene. 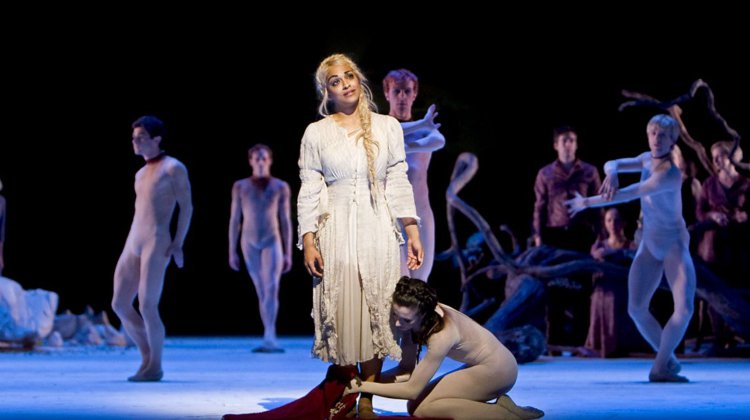 We are immediately into the second act which shifts into more serious and darker tones as the chorus now warn of the arrival of a monstrous giant, Polyphemus (Matthew Rose / Eric Underwood), who jealously loves Galatea, but whose physical threat is initially soothed by another shepherd, Coridon (Ji-Min Park / Paul Kay). Acis ignores Damon’s warnings about the short-lived nature of love, and in their determination to resist, he and Galatea promise eternal fidelity to each other in a duet which too soon turns to a trio as Polyphemus appears in a rage and murders Acis. As Galatea mourns the loss of her love, the chorus remind her of her divinity, and she immortalises Acis by turning his body into a beautiful fountain.

The Orchestra of the Age of Enlightenment, conducted by Christopher Hogwood, favoured vigour and speed to keep the action moving throughout, adding the necessary tension when needed, and were complemented by a young and competent chorus.

De Niese and Workman provide relaxed and enjoyable performances whilst Agnew sings with suitable urgency and Rose impressively terrorises the pastoral scene. Cuthbertson and Watson are outstanding dancers, but the world of song and dance never really integrated on stage as they seemed to exist in their own bubbles. The visually stunning ballet was perfectly suited for the lightness of the opening act but in doing so made the singers appear clunky; in contrast the darker mood of the second act was better reflected through song with the dancers unable to reflect the necessary horror and as such became a distraction.

The staging was kept simple which I prefer but felt somewhat dwarfed by the venue itself and the fact that the stage was trying to accommodate a dual production. The stuffed animals perhaps worked better at a distance but felt clumsy on a production zoom.

McGregor is to be commended for trying something different and the dual production aspect is something I’d be keen to see more of as with the right production, the power of the ballet to reflect the operatic thought would be something to behold. Unfortunately, here the two just didn’t fuse.