Leading Scottish playwright David Greig’s first play since 2013 was going to be the centrepiece of the new season at Pitlochry Festival Theatre until Covid-19 forced them to close their doors.

But the virus has forced theatres to become much more agile so Adventures with the Painted People has been rejigged to be part of their online Shades of the Tay offer, and not surprisingly given Greig’s reputation BBC Radio 3 snapped it up for their Arts in Quarantine series

It’s the same story set in 86AD as disgraced Roman officer and wannabe poet Lucius is captured by the fierce Picts lead by Caledonian witch with a heart Eithne, who is keen to use her captive to negotiate a peace with the disciplined legionnaires who are massacring their wild menfolk. 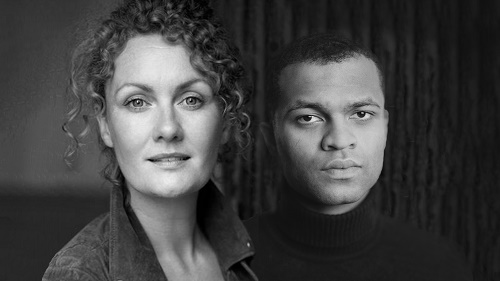 By a quirk of theatrical luck Eithne speaks Latin so they can communicate what they share, and critically what makes them different. They share personal tragedies, but it soon becomes apparent to them that the Roman world is one of rules and straight lines, whereas the Picts occupy a spirit world full of curves.

Where the play fails to convince is that the captor and her prisoner are friendly from the off, which reduces the dramatic tension somewhat, and at times it feels like a Wikipedia history lesson. Little is recorded about the Picts which gives Grieg almost too much latitude in recreating their world.

What is convincing is Greig’s gift for dialogue, and slick pacing, as the two create an uneasy bond in the House the Dead built over the River Tay, possibly near where the modern theatre sits.

Pitlochry’s Artistic Director Elizabeth Newman directs both versions. and her typically light guidance elicits warm, relatable performances from Kirsty Stuart as the pragmatic witch born to lead her folk, and Olivier Huband as the atypically sensitive Roman with a tin ear for verse. Newman’s long-time collaborator Ben Occhipinti’s understated mood music adds a real sense of place as do the various members of the Pitlochry Ensemble contributing additional voices.

Ninety minutes do fly by as you root for these two sensitive souls trying to make sense of each other’s worldview as the Roman Empire slowly draws to a close. The good news for Scottish theatre lovers is Adventures with the Painted People will return to Pitlochry’s stage in 2021, and it will be fascinating to see how the two versions compare.

Adventures with the Painted People in on BBC Sounds until 7th July. https://www.bbc.co.uk/programmes/m000jt6d