Based on the 1869 novel ‘The Man who Laughs’ by Victor Hugo, ‘The Grinning Man’ is an eerie and sinister tale of a grinning ‘freak’ searching to find ‘the monster in his mind’ and discover the secrets of his past. The musical enjoyed a very successful period at The Trafalgar Studios in London’s West End and is now available for streaming from its performance at The Bristol Old Vic.

Set in 19th century London, ‘The Grinning Man’ intertwines terror with dark comedy in order to relay the spine-chilling tale of an abandoned child called Grinpayne (Louis Maskell), desperate to find the secrets of his past and how he gained his ‘grinning’ smile in the first place. As the story unfolds, we are introduced to Dea (Audrey Brisson), a blind girl, also longing for her own discovery. She accompanies Grinpayne from the beginning of the story when he found her as a child. She continues to support him emotionally throughout his life at the fairground and supports him in his quest to uncover the truth related to what happened to him. 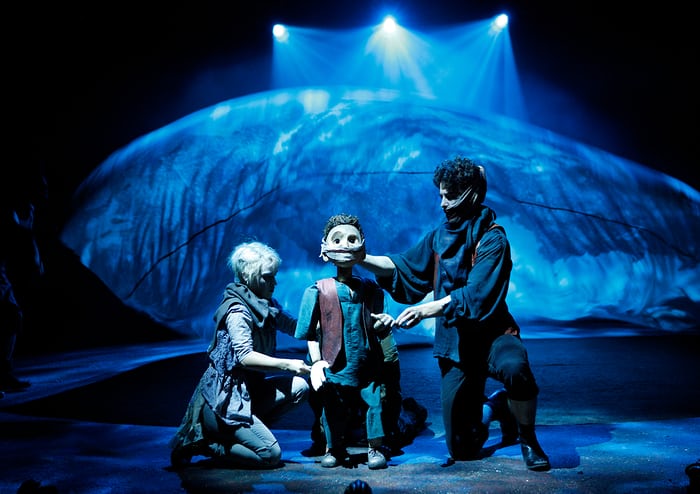 The show opens to the character Barkilphedro (Julian Bleach) with immediate referencing to Bristol and so playing to the audience from the beginning of the performance. With a central role as narrator he was a huge presence on stage and with perfect delivery of many comedic lines, Bleach in many ways was the true star of the show.

The part of Grinpayne was performed by Louis Maskell and for such a dramatic lead role he successfully portrayed the distress and angst in his search for the truth and his quest to understand what happened to his mother and how he received his gruesome grinning smile. Dea was a wonderful presence on stage and portrayed a woman who had lost her sight to perfection. It would also be remiss not to mention the outstanding performance of Gloria Onitiri who played the part of the deceased Kings daughter Josiana, the nymphomaniac who became obsessed with Grinpayne. She appropriately over dramatized her part and delivered comedic lines perfectly.

The puppetry was to be applauded. Performed by the original puppeteers of War horse, the puppets played a large part during the first half of the performance. The transition from puppets on stage to the actors taking over the same parts was seamless.

The second half of the performance was in some ways hard to follow and a lot darker than the first half with details of the plot being potentially difficult for the audience to grasp.

The set and costume designers are to be praised. Each scene consistently mirrored the atmosphere of the situation with a prominent absence of colour throughout, entirely fitting the dark gothic feel of the show.

Like nothing I have ever seen before , ‘The Grinning Man’ is a fabulous piece of theatre. Dark, gothic and at times had a combined feel of ‘Les Misérables’ and ‘Phantom of The opera’, it is not to be taken lightly. In these challenging times for all theatres, The Grinning Man was a treat to watch at home. Available for streaming until the 3rd July with donations welcome, I would encourage all theatre lovers to view it.

The Grinning Man at Bristol Old Vic can be streamed via https://bristololdvic.org.uk