The Car Man tells the story of the arrival of Luca in the town of Harmony and the events which subsequently unfold.  Set in Dino Alfano's Diner and Garage, we see Dino's wife, Lana, set out to seduce The Car Man and the consequences this brings.  Dino's hired help, Angelo, becomes romantically involved with Lana's sister, Rita but this relationship is heavily affected by the chain of events set in motion by Lana and Luca's liaison.   However, Lana is not the only who is cast under Luca's spell...

At times, this show takes you to the edge of your seat with tension.  There are scenes which are almost uncomfortable to watch, such is the emotion and meaning which is so excellently conveyed by the cast.

The performance begins before curtain up, with the actors gradually taking to the stage, going about their daily lives within the show.  This is engaging and whets the appetite for what is to come.

The beginning is dramatic, with the arrival of a mysterious stranger into the town of Harmony (if ever a town was mis-named, this one was).   His presence seems to have an effect on everyone...and not always for the better.   From the energetic, almost frenzied dance scene which opens the show to the later angst ridden scenes,   we see Harmony transform from reasonably contented to a place where tragedy ensues more than once.

Luca - the Car Man - who is masterfully played by Jonathan Ollivier, instantly transfixes the town as he quickly assumes the role of alpha male.   He has a sinister and menacing presence...yet early on he steps in to save Angelo (Liam Mower) who is the town's patsy.   Is Luca good or bad?  We are never quite sure until the end of the first half.

Liam Mower's excellent portrayal of Angelo demonstrates very clearly the devastating effect of The Car Man.  At times he gives a heart-breaking performance.   His portrayal of the nervous, unconfident garage 'gofer' is a world apart from what he eventually becomes.   This is extremely well illustrated by two dance scenes between him and Rita (beautifully and touchingly performed by Kate Lyons), one in the first half and one in the second.  The first is tender and completely mesmerising.  The second is brutal and harsh but you can't take your eyes off the performers.

Zizi Strallen as Lana is vampish and conniving as she sets out to get what she wants...Luca.   Their relationship deteriorates as everything starts to unravel...with terrible consequences.

Dino is played by Alan Vincent who was the first Car Man when the show opened in 2000.  As a result of Luca's kindness to Angelo early on, Dino is the one who unwittingly secures Luca's position within Harmony and also seals his own fate.   The scene in part two where he and Luca dance together is chillingly effective.

The set is intricate and slick, transforming from a red-lit, seedy nightclub into a Film Noir type prison scene in seconds.    The use of lighting to convey emotions, often from one extreme to another, is also very effective.

Obviously the music from Carmen is a large part of the show and combines with the intense performances to send shivers down the spine.   It is dramatic and tells the story.

There is no dialogue in this show.  However, no words are necessary thanks to the consummate skill of the cast who are to be congratulated not only on their performances but also their ability to make the extremely complex and physically demanding dance sequences look effortless.    The group dance scenes are reminiscent of the power and intensity of those in West Side Story.

This is a raunchy, electrifying and mesmerising show although you may want to think twice about taking your Grandmother unless she is quite broadminded!  It has energy, lust, anger and passion...not dissimilar to a Saturday night out in Manchester some might say. 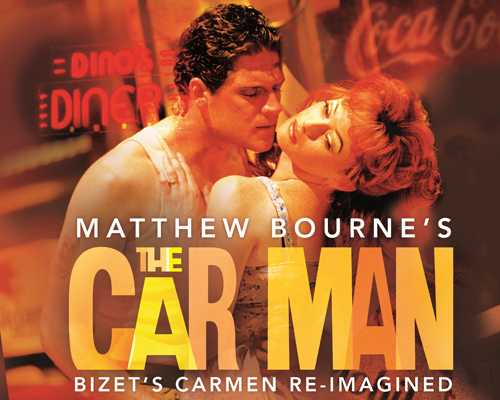