For Josie (Lynda Rooke) the dominatrix, tired of her profession and reaching her milestone 50th birthday it is time to evaluate her life. With an absent ‘dead’ daughter Shelly- Louise (Natalie Grady) and another daughter with learning disabilities, Brenda-Marie, (Anna Wheatley) life has been hard for this single mum and during a visit from her most regular and favourite client Lionel, (John Branwell) who likes to dress in ladies clothing and be dominated, she wearily throws in the towel. Martha (Isabel Ford) the religious Irish cleaner is suffering with OCD and has to do everything 5 times over and is totally oblivious to her employer’s profession. It is starting to become clear as to why the set has a huge bird cage arching over it …. This dysfunctional group are all caught up within their own lives one way or another, with a yearning to break free. (Elvis….’Caught in a Trap...’ get it?)

The play is performed entirely in the Elvis memorabilia filled lounge with cushions, rugs and framed pictures of Josie’s favourite singer adorning the mantelpiece. Brenda-Marie is Ice dance skating mad with an excitable personality and a longing for it to snow. Although Brenda-Marie is fabulously portrayed by Wheatley I found myself missing a lot of her lines down to the very strong, over emphasised, broad Lancashire accent and the speed at which they were delivered. Looking around the audience I could see that I was not alone, although many were laughing I suspect they were local and familiar to the accent! I feel I missed out on some very funny bits as the ones I did follow were hilarious with their naivety and childish frankness. There are a few occasions when some of the other actor’s voices were not projected enough to make it possible to hear clearly, particularly with their backs to the audience and I do wonder on a larger stage than the layout at the Octagon, whether this may be more of a problem. 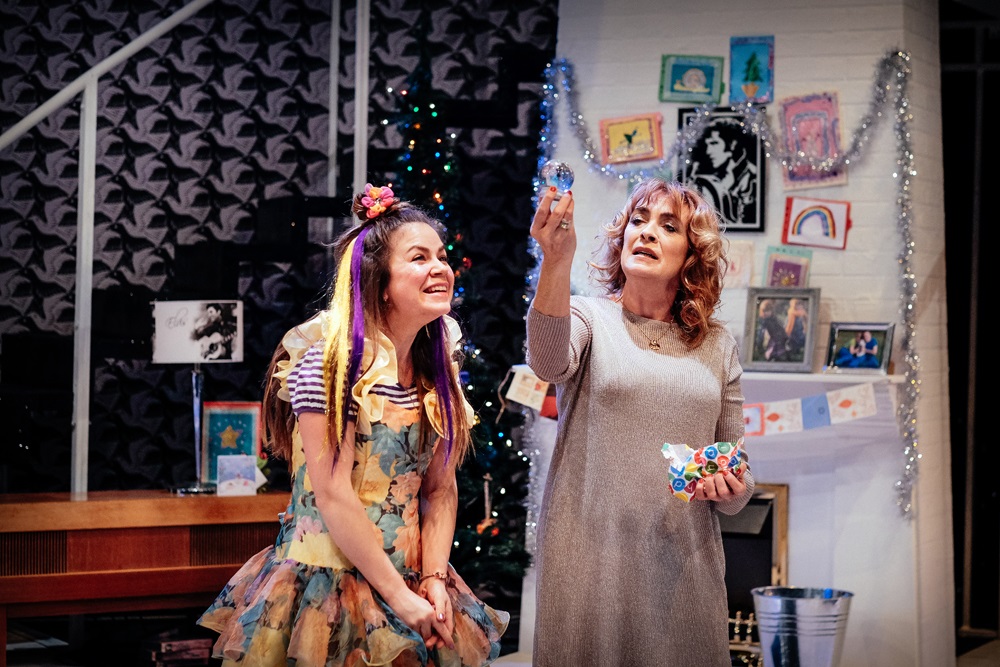 Rooke expressively acts out the disillusioned mum, friend and employer with an openness revealing her true self. Lionel, eager to cheer up Josie, decides that she should have a party to celebrate her birthday and insists upon organising it and promises a special visitor. Here enters the building, the one and only Chinese Elvis, Timothy Wong. (Christopher Chung) Setting out on his career as an Elvis Impersonator, we see the shy, nervous Wong burst into the room and launch into an Elvis song to the totally unimpressed Josie, knocking his confidence further. Chung gives a convincing vulnerability to his character Elvis and you can’t help but want him to achieve success and believe in himself.

There are some very moving and poignant moments in scenes with Martha and Lionel, who both share their fears and dreams and are brilliantly cast with Ford and Branwell.

The long ‘dead’ daughter returns for her mother’s birthday and is not surprised that her troubled relationship with her still exists. There are emotional stories emerging throughout the play, with many comic moments and superbly enacted by all but in particular for me, the portrayal of sisters Shelly-Louise and Brenda-Marie.

‘I just Can’t Help Believing’ that this production will leave you ‘All Shook up’ and for those with ‘Suspicious Minds’ It is ‘Now Or Never’ to go and see for yourself!! (Apologies…. I’ll get my coat!)

This comedy play/farce penned by Charlotte Jones and directed by Mark Babych, was first performed at the Octagon Theatre in 1999 and was given an extended season. The revival continues until 2nd April 2016 for further information and tickets. www.octagonbolton.co.uk