The Witches - The Lowry, Salford

In a co-production between Leicester's Curve Theatre and The Rose Theatre, Kingston, and with Roald Dahl's excellent story adapted by possibly the best known and most well respected children's and young people's playwright there is, David Wood, then the bar level is raised high and this should have been a production to deliver..... But was it?

The open set, on the Lowry's Quays Theatre stage, was, in Dahlian terms, fantasmagorical. With three right-angled archways covered in lights taking pride of place, whilst underneath a grand piano which looked like it was about to collapse; a twisting staircase leading to a platform attached to a gnarled tree; a sofa, a drum kit, a canon, and bunting all around; the stage looked set for a circus or carnival. It was indeed a fantastic set, and with all the different light permutations used throughout the play, and all the pyrotechnics the atmosphere was one of magic. The firing of the mouse from the canon through the book was excellently done, and having the Grand High Witch drown in the pea soup was magic indeed. There were a couple of problems with this set though for me. One, the use of the projection screen on the third 'arch' was not in keeping with the set. The set was out of circus fantasy, and the images portrayed were stark reality and the juxtaposition of the two didn't fuse together. And two, I was all the time expecting to hear The March Of The Gladiators and see a couple of clowns throw a bucket of water over the audience!

Let me make this clear - I really did love the set. Designed by Isla Shaw, and the magic under the guidance of Neil Henry. It was fabulous. (Except for the projection screen). It just didn't quite hit the mark for Dahl's The Witches. 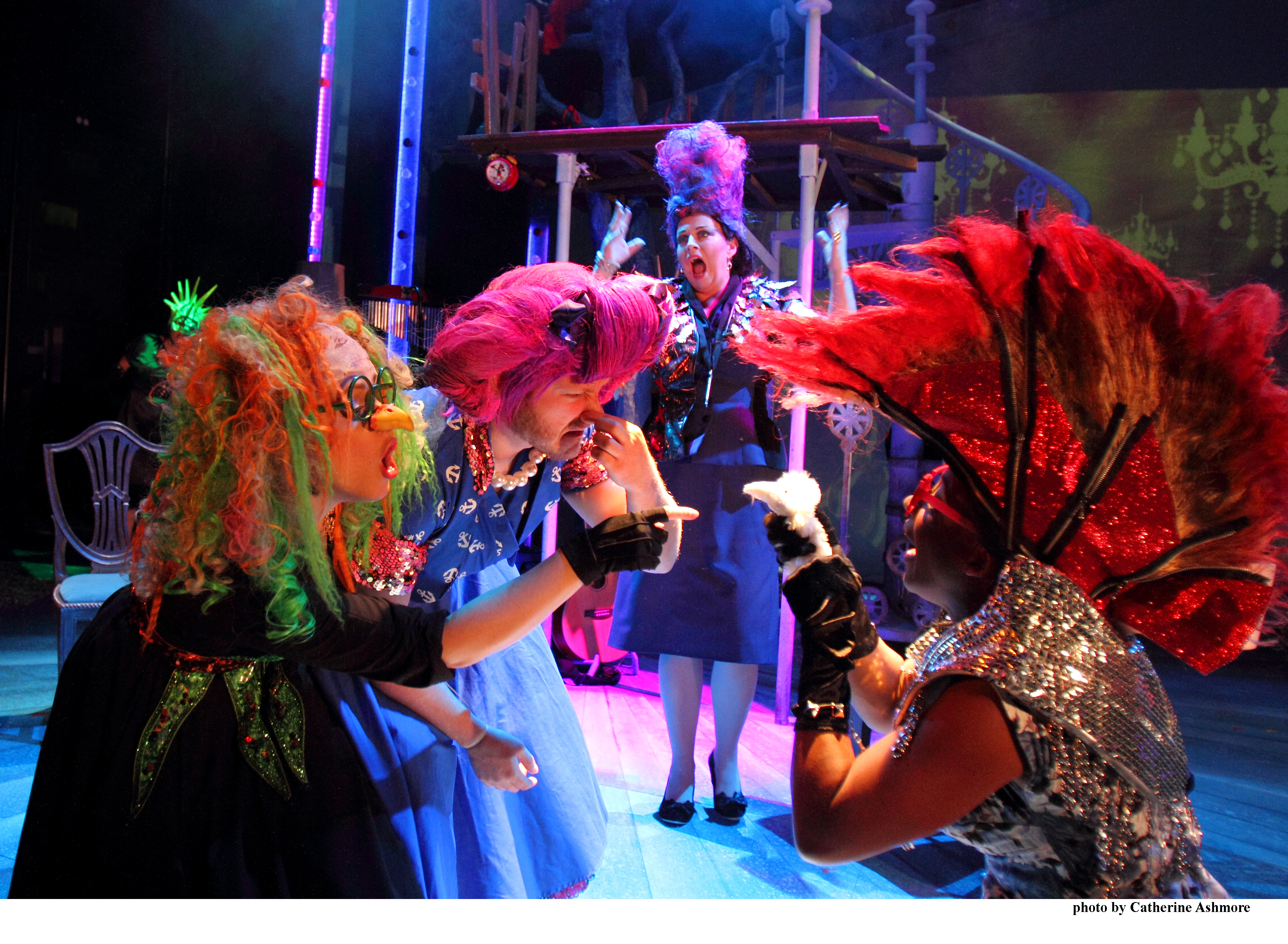 The lighting design (David Phillips), was, for such a short show, extremely complex, and most of the effects created worked very well indeed. The different hues created for each scene were excellent. However, there was one occasion when the Grand High Witch stood on the platform, her face was not lit; and I didn't understand the idea behind having beams of light sweep across the audience when they did.

The show was 75 minutes long. Not very long, but long enough for their target audience - the tweenies. And indeed, the audience last night was made up of majority tweenies and parents. However I do question the necessity for an interval in a show of this length. I personally would have preferred to have sat for the one hour and a quarter straight through. Even children's shows aimed at primary children of 5 years last an hour without interval, so this would not have been an issue.

The play took a little while to warm up, and before the audience started to 'understand' the style of presentation and laugh along with them. The opening song - all the cast were not only actors, but singers and competent musicians too, playing all the instruments for each song in the production - was a little odd. It started with one of the cast walking from the back of the auditorium shouting 'hello!' I have to be honest here, and I actually thought he was a member of the audience calling to someone up in the balcony! I think others must have thought similar too since no-one really responded to him until he started to shout 'HELLO!' directly at us, and other cast members walked onto stage! They then sang their opening song in which they asked people to turn their mobiles off and respect theatre etiquette, and hoping that we will enjoy their presentation. It was a bizarre approach to the play, acknowledging the audience's existence and then simply turning their backs on us and building the fourth wall, which did get broken every now and again later on, but it was never really clear whether or not the wall was there. This was nowhere more obvious than when the witches are in conference and they smell children. They come right to the front of the prosc arch, on hands and knees sniffing at the front row of audience only centimetres away and yet it is not them they are smelling, but the Boy Mouse behind them!

If the play hadn't have had a cast of seven high-energy, personable and talented performers, then it would have fallen flat on its face. Fortunately though, the play was saved by the multi-talented cast who played a variety of minor roles between them, and all took on one principal part, as well as playing the sound box, drum kit, guitar, piano, and goodness knows what else, and all were good singers too. [All original music was composed by Dougal Irvine, and was in keeping with the style of show and very accessible.] This multi-tasking and quick-changing suited the circus / carnival style, as did much of the acting too. Most of the characters were mono-dimensional and hammed up for comedic purposes, yet their performances were enjoyable and we were still about to emote with them. The Grand High Witch was played with pantomimic evil relish by Sarah Ingram; The Boy (why wasn't he given a name???) was played rather acrobatically and with simple honesty by Fox Jackson-Keen; with Karen Mann the ever-loving and understanding Grandma. The other roles were played by Sioned Saunders (Witch), Kieran Urquhart (Bruno), Elexi Walker (Mrs Jenkins) and Justin Wilman (Mr Jenkins).

As I might already have intimated, then I found the directing, by Nikolai Foster, a little muddled and unclear. In the Dahl version of this story, the witches once alone in their hotel conference room are allowed to take their wigs off and we see them as witches for the first time. In this version however, they put their wigs on, and they are wigs which would even stand out on a Pride Parade! The whole idea of and premise behind this story is that witches blend in with humans and are unrecognisable and indistinguishable except for a couple of telltale traits. They always wear gloves - even in the summer - to disguise the fact that they don't have fingernails and have curly gnarled fingers. This was disregarded and thrown out of the window. Witches have bald heads with itchy wig sores, and wear wigs - the kind of wig which looks like real and natural hair - so as to blend in completely. Again this was disregarded and thrown out of the window with their wigs being outrageous and for comedy value only. The only trait that was correctly used was that they smell children, and the smell is obnoxious to them. It is the smell of excrement. This element was given the full comedy treatment.

There was a nice little message at the end of the play - It doesn't matter who you are as long as somebody loves you. And the final song, after the curtain call, despite it feeling a little false and wasn't quite as upbeat as perhaps it ought to have been, echoed that message.

There were some really nice moments in this play (truthful and heartfelt acting between boy and Grandma; the ball of wool sequence with a dumb frog; the mouse boy's 'friendship' with the mouse Bruno) but there were equally as many rather odd directorial choices which didn't work too well at all, such as crossing the north sea in a boat made of a standard lamp and life-buoy and the seagull on top of the actor's hat.

Essentially though this is a rather frivolous entertainment for older children and younger teenagers who may well not be as exacting and particular as I was, and will undoubtedly come away from the production happy and entertained, but it is not something that is going to stay with them, it will have been forgotten about come morning.