And they call them the good old days! Unemployment, hardship, poverty, unscrupulous landlords, overcrowding and bed bugs thrown in, life was far from perfect following the Wall Street Crash in 1929 in the United States. As a consequence, there was a knock on effect throughout Europe with banks and businesses failing and this is where we begin our biography of Helen Forresters, Twopence To Cross The Mersey.

Arriving at Lime Street Station, Liverpool in 1931 are the Forrester family, mother, father and their seven children including new baby Edward swaddled in a blanket. (throughout the play only Alan and Helen make appearances as the children.) Wearing the only clothing they possess and with few other belongings, the former middle class family are destitute following the bankruptcy of the father (Christopher Jordan) and were evicted from their comfortable home and lifestyle in the South West. Mistakenly he believes the north to offer better job prospects. With a high maintenance wife (Emma Dears) finding it difficult to adjust to the life they must now lead, eldest daughter, 12 years old Helen (Maria Lovelady), is thrust into taking care of her siblings and in doing so her education is sacrificed. 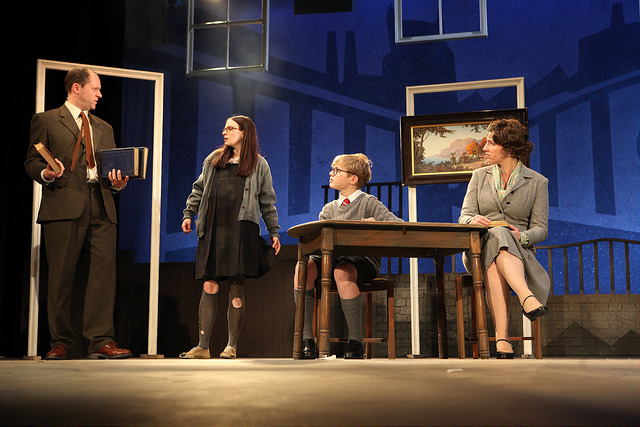 Despondency hits the father as he joins others in the dole queue where typical of 'scouse humour' and the ability to make light of any situation, there are several comic moments given courtesy of Jake Abraham, Roy Carruthers and Phil Hearn who all perform multiple roles during the play. As the mother, Dears is convincing as this truly awful character, self obsessed and still demanding, totally uncooperative towards her daughter’s pleas to attend school. It is hard to warm to her which is surely a credit to Dears performance.

Moving from lodgings to lodgings unaware they are being ripped off by their landlady (Eithne Browne), the family soon have to rely on the generosity of others to survive. Browne too performs as several supporting characters and her portrayal as the caring neighbour Mrs Hicks brings touching scenes but also some light relief. Browne gives perfect characterisation for all the different roles she plays and is a delight to watch.

Lovelady simply excels as Helen but there can be no better tribute than the words of Helen Forrester’s son Robert Bhatia after seeing her portrayal, 'Maria Lovelady was utterly convincing as my mother'. Tonight, I have to agree that her performance was strong and believable as she takes us on Helen's journey of despair with her family and showing her strength and determination to get an education.

During the play there is a narrative given in the third person by some of the performers which helps to move the story along. There is little scenery, consisting only of a couple of wooden chairs and a table, suspended window frames, two doorframes and a vague street scene beyond. Initially I thought this simplistic set boring and uncreative but it does add to the bleakness of the times. Written by Rob Fennah, directed by Bob Eaten, Pulse Records Limited and Bill Elms's presentation of Twopence To Cross the Mersey is compelling, heartbreaking and accurately portrays the hardships of those times and is truly a remarkable story of life for the young Helen Forrester and will surely tug on those heartstrings.

With performances until 12th November 2016 at St Helens Theatre Royal for tickets and further information: https://sthelenstheatreroyal.ticketsolve.com/#/shows/873542679