Moira Buffini has been writing plays professionally for 25 years. Born and bred in Cheshire she has challenged the theatrical establishment to open their eyes to female writers. Never a writer to shy away from strong storylines, she has tackled warring brothels in 18th Century London in her TV drama ‘Harlots’.   In another historical drama she wrote about a same sex couple in medieval England called ‘Silence’ at a time when this type of play was not universally accepted, and she struggled for years to find a theatre who would produce it.   ‘Dinner’ was one of her earlier plays, achieving success at the National Theatre in 2002, then transferring to the Wyndham Theatre in 2003.

In the MADS production of ‘Dinner’ we instantly see that the staging has been kept simple to keep our eye drawn to the table without superfluous distractions. This has the effect of making the drama feel more intense as there are no soft furnishings or additional props to lead our eye away from what unfurls at the table. 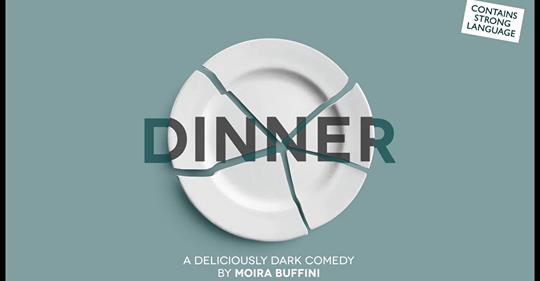 We are introduced to the characters gradually. Paige (Suzanne Copeland) is hosting a dinner to celebrate the recent success of her husband Lars’ book, ‘Beyond Belief’. Lars, we are told, worked in the City until he tired of making money and decided to go back to his love of philosophy, hence the publication of his book.

We are soon introduced to Wynne (Libby Rous), Hal (Rob Copeland) and Sian (Amy Leech) who inform us that there is a heavy fog outside which always adds an eeriness to a play. Paige (Copeland) has planned the evening down to the last detail, she is very used to hosting dinner parties and she has hired a waiter to do all the fetching and carrying. The waiter (Luke Oldham) is a key component of the play and Oldham plays the role well, never letting the professional waiter mask slip.

The acidic tones of Paige are contrasted by the flowery nature of Wynne and these opposites of character add to the interesting development of the storyline. There are some heavy subjects dealt with during the play. Death, suicide and murder become part of the conversation. Mike (Andy Cantillon) enters the play slightly later and becomes that character that is elusive as we never quite know where his part in the play will lead us.   His role helps to emphasise that the other members of the group are rather spoilt and middle class.

The comedy is dark, but it is engaging, and the suspense is masterfully drawn out by the cast.   The direction by Cameron Chandler has allowed the excellent writing to be centre stage. The restrained nature of the set and the character-building costume selections reinforce the belief in the script by showing their reliance on the playwright’s skills.

This is another excellent offering by MADS, and a strong start to the new season.