The Battle of Boat - The Brindley, Runcorn

I have a great passion for seeing amateur theatre, young talent blooming into rising and accomplished stars and seeing something that is unique, interesting and worthwhile. I have seen many productions from the Cheshire amateur dramatic group ‘Cody’s’, an organisation that has continued to thrive and develop under the expert guidance of Director Nick Cupit over the last 20 years and admire the company and Nick for having the courage to put on performances that are risky, complicated, challenging, thought provoking, funny and ,as this latest production demonstrates, relatively unheard of. Due to this courage we, the lucky punters, get the opportunity to witness shows that any West End London show goer or cast member would admire, respect and revere and all in our local and wonderful Brindley theatre right in the heart of Runcorn Cheshire. We are surely fortunate.

The story of The Battle of Boat was presented through a special arrangement with Theatrical Rights Worldwide (TRW) and as a fairly ‘new to theatre ‘production (first produced for stage in 2016 by Jeremy Walker) is a show that many have never seen before.

This powerful story (written by Jenna Donnelly) - depicts a tale of school children trapped in the fear and torment of the First World War who yearn to help the soldiers on the front any way they can. The children learn about the war through a film that is played to them in a local theatre and from this moment their world is changed. They are thrown into torment wanting to make a difference and help their friend/brother William Miller (played by the very talented Oliver White - who throughout the performance reminded me very much of the actor Eddie Redmayne). 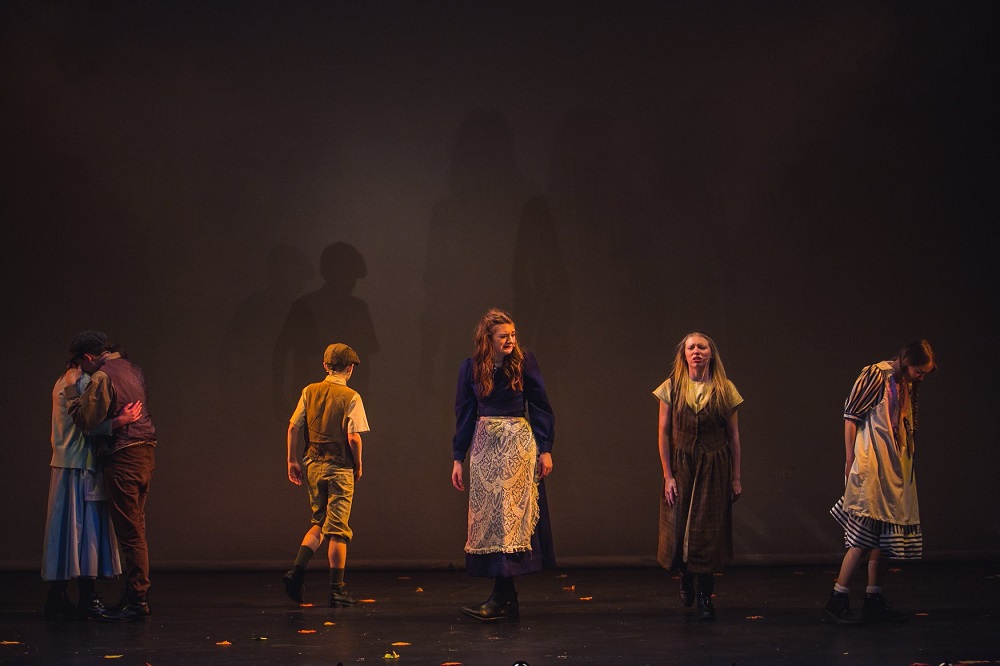 I would presume that the cast would have found this world of naivety, passion, compassion, hatred and conflict quite a challenge being a world away from their world of instant gratification that they have today (to think that the times they were conveying even their great grandparents probably weren’t born)   but I was wrong . Credit to each and every one of them - they delivered with confidence, conviction and compassion -well above their years and each gave the performance of their lives. With a simple set and minimal props all eyes were on the stupendous cast of 14-19-year olds who owned that stage and every single movement (marvellously choreographed by Laura Cupit) and lyrics (amazing songs written by Jenna Donnelly with the hauntingly beautiful music by Ethan Lewis Maltby). From the moment the curtain rose this cast were sensational.

The courageous story of a young group of children who, as well as facing the heartbreak of one of them being enlisted to the war, also must face the horror of being bullied by a local gang. The gang - leader Leslie ‘Gripper’ Wood played (amazingly by Ewan Schooler – a recent NODA winner) was depicted so well as a young man with his own demons and frustrations who, as all bullies do, hid this through acts of unnecessary violence and hatred. In compassion, the group had to endure the lovingly hysterical antics of the local clown (played exceptionally by another NODA winner Isaac Harthill) and the lovable tom boy – bravest of the lot - Florence (played by the very talented Emma Brew) and the equally brilliant Ellie Heavey who played the emotional Gladys Dixon . However, through all this anguish - the thread of hope, determination and endurance was the sister of the enlisted soldier Frances Miller – played by the awesomely talented Poppy Williams – wow that girl can sing! She was as good as any West End performer I have seen, and I am sure has a very big career ahead of her.

The scenes of the friends reading William’s letters from the front were depicted very cleverly and at the end very movingly. The show expertly delivered with emotion and humour in equal measures and the audience were thrown from tears of sorrow to those of laughter within moments and no-one went untouched.   I am not going to tell you the plot – as most reviewers do. The unfamiliarity of the story for me made the performance even more impactful – so Nick was right again – and so I won’t share the story with you anymore.

Suffice to say that this show is not a should see or a nice to see but a must see. The cast and all involved in the production should be very proud of such an amazing show and accomplishment.

Running over the next three nights Thursday 5th to Saturday 7th March – go and see this show. It is a life changer.

Sometimes a show comes along that will touch your heart forever. This is one such show.