Never has there been a more apt and clever title for a comedian than this - I could smell his act a mile a way! But seriously, a great title for one of the most talented punsmiths on the circuit; Canadian-born master of the one-liner, Stewart Francis.

For those of you who still don't know who he is, then he is a comedian who makes regular guest appearances on TV comedy programmes such as 'Mock The Week' and '8 Out Of 10 Cats' etc, has front-lined 'Live At The Apollo'; and this is his third UK tour.

So I caught up with this, his latest touring show at The Lowry Theatre in Salford last night, approximately one third of the way through his tour which takes in all four countries of the Union and even the often forgotten Isle Of Man. However both he and his support act kept referring to our location last night as Manchester. I am neither Salfordian nor Mancunian, so this didn't bother me, but for those who are Salford-born, then this is a really touchy subject which many get very passionate about. Hopefully they were able to take it on the chin last night!

The stage was open as the audience entered, and towards the back of the stage was a projection screen upon which various cartoon drawings with captions were being displayed. Something for you to look at and laugh at while you were waiting. This was a lovely idea; but failed miserably at this venue since, unless you were seated in the front five rows, the words were unintelligible due to their diminutiveness.; and the theatre last night was big and full!!

The show started with a 25 minute spot from an unadvertised, unknown and unwanted comedienne called, I think (since her name is not on any publicity) Allison Jane Smith. She was so 'good' in fact that quite a lot of audience members left during her routine to reappear after the interval; and I think word got round too since there were even some who simply turned up for the second half! I don't know where Mr. Francis found her or why he chose her to front him (apart from the fact that she is a fellow Canadian) but they certainly did not compliment each other in their comedy-style, and she was given, at best, a very lukewarm reception and few actually laughed. Her taking the Mickey out of famous singers was border-line abusive, and her routine about erotic dancers was not only ill-judged but very misinformed! For your information Miss Smith, male pole dancers DO exist, and pole dancing is now a well respected and popular SPORT.

Then, thankfully, there was an interval of about 20 minutes before we finally got to see the man we had all come to see, Stewart Francis. Part of his charm is his nonchalance and rather tongue-in-cheek acidity of delivery, and from the moment he strolled on stage, he commanded the stage and our attention in that most relaxed and easy conspiratorial style of his. We were treated to a one hour, easy to watch, and laugh-a-second routine which really had no discernible through-thread, but was very cleverly put together nevertheless, and his lovely cross-references of previous jokes worked wonderfully. A stand-up standing up on top of his game standing on stage something akin to a slightly shaken but not stirred James Bond of comedians! Only Mr Francis could call himself a paedophile and make jokes about this, Parkinson's Disease and other normally taboo subjects with such aplomb that they were genuinely funny and completely harmless. No-one could take offence at all; even when he swore, he swore with panache! And he did a passable Sean Connery impersonation too! Bravo Mr. Francis!

End-note. Last night's show was being recorded to form part of his Christmas DVD. However, since audiences are also shown on such DVDs, there really should have been some notice of this PRIOR to people buying their tickets, or even at the very least, prior to them walking into the theatre. We were only advised of this by his support act at the very end of her routine before the interval. Terribly bad policy, but I don't know to whom I should point my finger at for this! 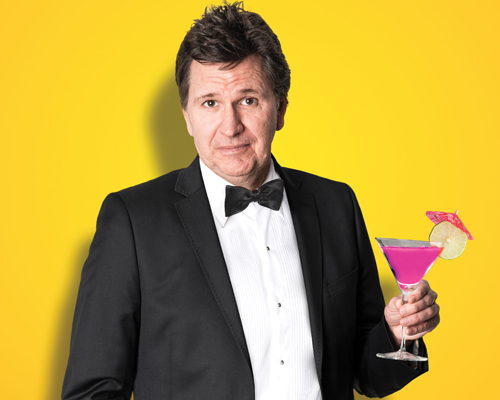