Beat the Frog runs every Monday night and gives new aspiring comedians a chance to take to the stage. Their unique format has been used since 2003 and despite a few name changes still remains a popular starting point for the UK’s biggest comedians. People such as Peter Kay, Johnny Vegas and Mick Ferry all took part in the nerve racking beat the frog and have never looked back.

The compere for this particular evening was Dan Nightingale, who had the audience rolling with laughter within a matter of minutes. He soon got everyone involved and geared up for the show with his on the spot observation humour and quick fire questions. Followed closely by two very different and hilarious warm up acts before the competition began.

Three audience members were then chosen to be given green cards. The aim of Beat the Frog is to be able to complete your five minute stand up without all three cards being raised. The three chosen people simply raise their card if they do not think the quality of comedian is good enough. If the three cards go up before the five minutes ends then a horn sounds and the act must leave the stage. The people who make it through their full allocated five minutes then go into a clap off final at the end of the night, ultimately deciding the winner.

On this evening there were eleven entries, with five making it through to the clap off final. Each act was very different which made for very interesting viewing. There was Sean Turner who told several stories that just got more and more ridiculous as they went on. Followed by Julian Lee whose comedic style was completely different, opting to keep his routine to short snappy puns. 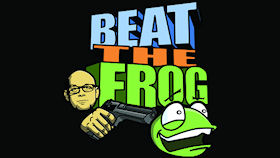 The stand out performances from this evening came from Jamie Hutchinson who confidently delivered a wealth of ginger jokes and impersonated northern characters that the audience easily relate to. Followed closely by Neil Harris, who told of his dating struggles of being a stereotypical nerd. The audience clearly agreed with his brilliant routine and Neil was crowned the winner of the evening.

One critique of Beat the Frog is that it is slip into two section, with the second half only starting around 10.15pm. This unfortunately meant that many audience members had left and did not witness the events entirety. This could mean that the performers in the second half are at a disadvantage due to the drop in energy levels,

Overall this is a great night with such a fun and welcoming atmosphere. The venue is incredibly well laid out, giving the audience a choice of whether to observe from upstairs or sit inches from the stage, with every chance of being picked on. If you are the type of person who likes to get involved in a show you then this is definitely the place for you. Seeing eleven very different comedians in one evening means there will defiantly be a style to suit everybody's taste. The wonderful thing about Beat the Frog is that no two weeks will ever be the same. You never know - you might be one of the first people to witness the next big thing.