If your ticket says 7.30pm, get in by 7pm. You’ll be invited onstage to populate the barbers’ chairs while the actors Bogle, Azonto and Kpanlogo, transforming the grand old Lyceum into a vibrant Barber Shop. The tone is set with this fabulous pre-show manoeuvre. It’s frenetic, carnival-esque, for even if you’re sat in the stalls, stationary: ‘Zero miles per hour never felt so fast.’

Designer Rae Smith’s set’s a riot of colour, Barbershop signs denoting each of the play’s settings. Once the play proper starts, beautifully delivered choral (barbershop!) harmonies announce each switch between the shops in Lagos, Kampala, Accra, Harare, Johannesburg and… Peckham. Because this production has been around since May 2017 it’s easy to take for granted the clever way these scene changes are effected. 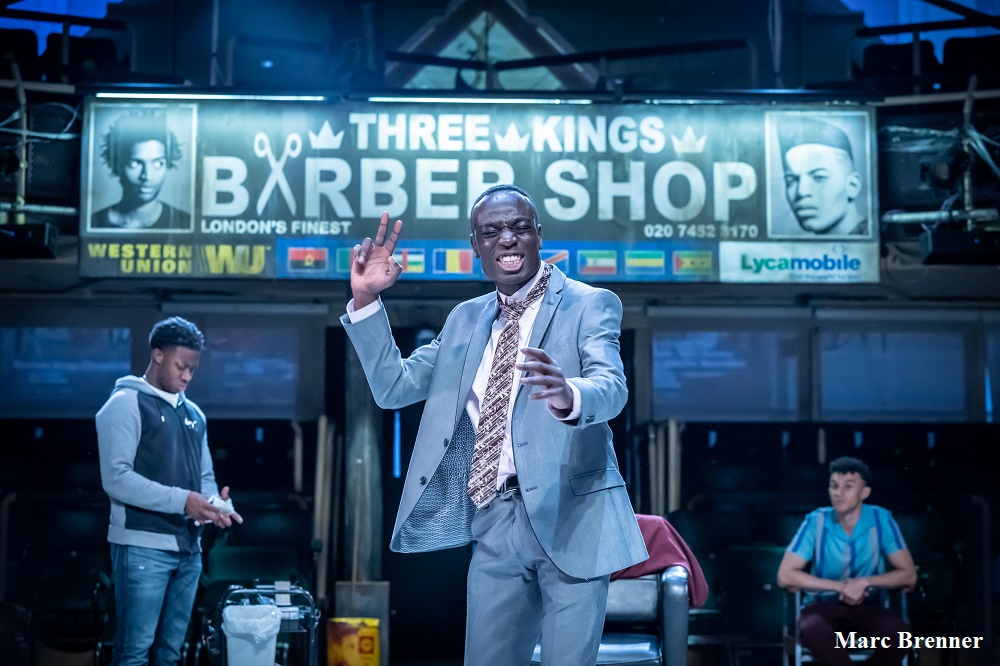 The pace does ease off but there’s plenty to take in. It would be worth seeing this twice, the first time to enjoy the spectacle, the second to dwell on some of the more serious themes. They’re threaded in and out like the neon hair strands decorating the purple globe suspended above.

Writer Inua Ellams explains in the programme how he was inspired by the discovery of a ‘pilot project to teach barbers about the very basics of counselling’. Not all men go to the pub, not all cultures drink alcohol, and, quel surprise, they do need someone to talk to, so where else? As someone comments; ‘in dark times, the Barbershop is like a lighthouse,’ attracting men who – like islands – risk isolation with no-one available to share their worries and doubts with. These worries and doubts concern what is expected of a man nowadays, the deeper question being; ‘what is masculinity?’ This affects all men but as the play moves on the historical impact of colonialism and slavery visited upon Africa (mostly by Europe) illustrate that for black men the question – and any answers – might be more complex.

Inua says his plays start out as poems until ‘the voices in my head… grow bigger… and in numbers,’ in this case struggling to articulate and deal with fractured psyches, perpetuated by the pressure to ‘be a man’. Gambling & alcohol are referenced as activities perceived as ‘manly’, while in reality they serve only to diminish, rendering them ineffective (or absent) as husbands, fathers, or… men. In pursuit of these voices he travelled around Africa for six weeks, returning with 60 hours of recordings and this accounts for the verve and veracity of the distinct flavours depicted. The actors play well together and appear to be enjoying themselves, the criticism I overheard about any ‘looseness of direction’ (Bijan Sheibani) overlooking the context; as some of the characters point out, in Africa there are less time constraints on one’s life. Too tight a direction would have diluted its essence.

Attention to detail in terms of costumes (Lydia Crimp) and props was warranted though; those suits and shirts were as jaw-dropping as they were appropriate. As were the Castle Lager can and bottle of Wray & Nephew. I’m off to the pub past the poster telling us: ‘Joyous. Life-affirming. Go!’