Tonight I watched ‘A Double Bill’ with Act one called Contractions and Act two called North of Providence. Both acts were not related to each other but both had minimal set and two actors on stage for each, it was very impressive.

‘Contractions’ tells the story of office worker Emma’s life, played by Amy Du Quesne through various meetings with her nosey manager. Her manager asked her many questions about her personal life yet does not reveal anything about herself, and suggests that she needs to know vital information about Emma’s life for the ‘office dynamic,’ rather than actually caring about Emma and her wellbeing. The comic timing of ‘The Manager’ played by Clare Cameron was impressive and the dynamic between both characters was brilliant. 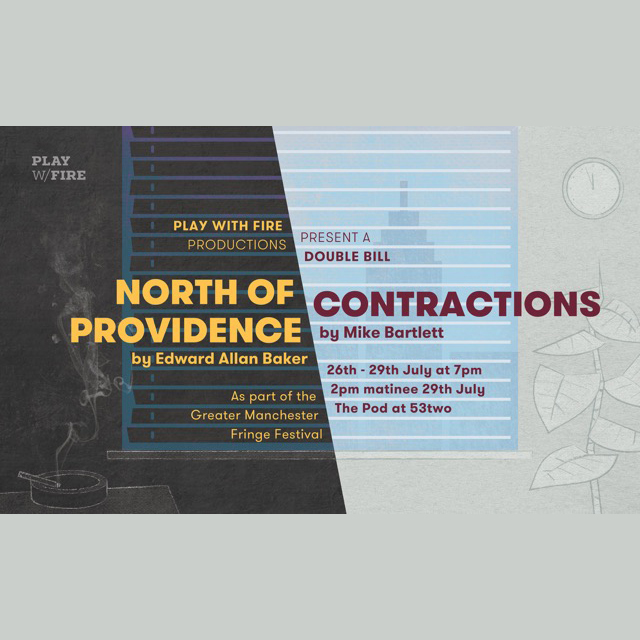 The two contrasting characters worked well together. Each short scene became more intense with ‘The Manager’ asking even more personal questions, to the point where Emma digs up her dead baby so that she can keep her job. ‘The Manager’ is certainly an objective and cruel character who did not care and suggested that Emma sees the psychiatrist so that her sale figures improve. This was extremely harsh and showed Emma to become even more angry, to the point where she agreed and then the last scene we see her much happier. Both characters were played extremely well and I particularly liked how Emma grew increasingly angry whereas the manager stayed the same throughout each scene. She was completely oblivious to seeing how her questioning was affecting Emma, and that she was merely doing her job and for the company.

North of Providence followed this act which again was powerful and focussed on important issues. ‘Carol’ played by Hannah Ellis Ryan takes a visit to see her brother Bobbie, played by James Oates, who leads a ‘scum bag life’ to tell him that their father is dying. The portrayal of Carol’s anger was clear to the audience as soon as she came on stage. Both characters argue with impeccable American accents, and we as the audience learn that ‘Carol’ is a rape survivor. Carol has been attending self-help classes whilst Bobbie has been drinking and not doing much else. The dynamic between these two characters was great and the audience could see how each of them found the other frustrating. Towards the end of the short play, Carol gets angry because of finding out Bobbie has stolen from her. After her angry outburst, she is about to leave the room, but Bobbie tells her how he witnessed her being raped and felt awful. The play ends with Bobbie breaking down and Carol comforting him, repeating the words ‘good for you.’ I felt the ending of the play showed Bobbie in a different way, allowing us to feel sympathy towards his character.

Both of these short plays were excellent with minimal cast and props, making the story being told all the more powerful in both plays. Each actor in both plays bounced off one another’s lines very well, making it thoroughly enjoyable for the audience.