Danny Clifford writes, produces and stars as Josh in what’s ultimately a disappointment in his second writing credit, after earning fringe award nominations last year. Josh is a boxer, engaged to Kath (Eve Gordon), an artist whose success is threatened by her increasing use of drugs.

Much like protagonist Josh, this show has a lot of heart; but in the end it’s too clichéd. In a scene when Josh confronts Kath about her drug habit, the dialogue sounds more like the sorts of things people say to drug addicts, than feeling like what Josh would say to Kath. Many of the scenes are incredibly short, imparting a single piece of information to move the plot along. 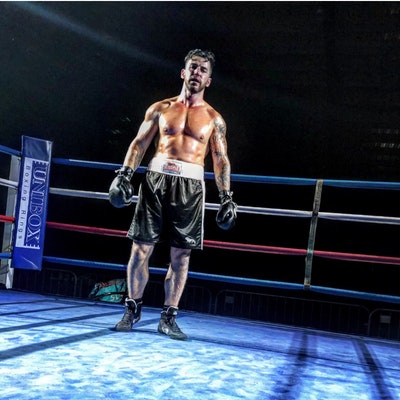 The acting is strong from the whole cast although the characters are very typical and for the most part don’t really see much development. The great exception to that is Matt Seber, as Josh’s dad, John. For the most part he’s a drunken embarrassment to Josh, but when things are coming to a head he redeems himself, and proves himself to be a loving father.

Karl John Koo’s direction is decent without being remarkable, and the staging is unspectacular. Whether it’s Josh and Kath’s home, a strip club, or a boxing club, the only set is three folding chairs in a line. The back of the set is dominated by a white projection screen, which is only used in one scene.

In the end, there’s a lot of earnest effort on display but the show just doesn’t come together as a whole.