Blue Lines is a new play that features the story of a teacher and schoolgirl, who form a bond over after the schoolgirl discovers that she’s pregnant. Written by Stefanie Moore, Blue Lines was the winner of the Hive Award 2019.

The play is a two hander featuring the teacher; Sarah and the schoolgirl; Abi. Sarah is a bit of a nervous wreck and seems like an awkward, timid person. Whereas Abi is loud, annoying and extremely naive.

As the play begins Sarah is delivering a sex education class rather awkwardly. However, as the class finishes Abi approaches her and reveals that she’s pregnant. The rest of the play follows their journey as we learn about each of their lives and how Sarah is desperate to have a baby and suddenly becomes friends with her pupil who got pregnant on her first attempt and now doesn’t know what to do. 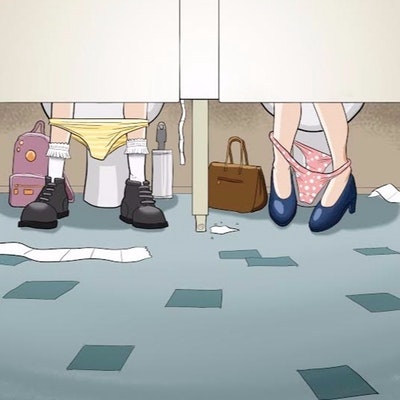 The acting is solid and quite good, especially during the emotional scenes. However, the opening scene was a tad too much on the OTT side the actor playing Abi - all the screeching and panting made it difficult to hear the dialogue. Sometimes less is more.

This play definitely ticks the box for comedy/drama. There are a few light hearted moments in there which are needed, because let's face it without them the play would be quite depressing in places.

I really liked the concept of writing the date on the board as it helped the audience understand that time had passed since the last scene. However, I did noticed Abi mentioned her first scan was on the 15th, but when they discussed the scan the dates didn’t match up. Perhaps I missed something, but it didn’t seem to add up.

It’s quite well known that an actor’s worst nightmare is the props playing up. Unfortunately on their opening night the flipboard they used fell down during one of the scene transitions. It was just so unfortunate as that was one of the few props used in the show. Thankfully the actors were able to get it back together and carry on. However, I do raise the question as to why it was used in the first place. It did help to set the scene for the school, but faulty props like that are not what actors need when they are performing. As this was opening night I’m sure there will be a Plan B to prevent that happening again.

Two handers are notoriously difficult to pull off as they’re quite intense. Blue Lines has some good performances and an interesting story. It’s heartbreakingly sad in places and there’s a couple of laughs in there too. https://manchesterfringe.eventotron.com/?event=36423