Written and directed by Rob Johnston and performed as part of The Manchester Fringe Festival, the Riot Act is a two man show that powerfully portrays the events surrounding cotton workers protest on 12th August in Preston, Lancashire in 1842.

The story is told in relation to it being 23 years after the Peterloo Massacre when Lancashire Cotton Workers protested about their horrendous pay and conditions. On being approached by authorities on Preston’s Lune Street they are read the Riot Act. The results of the protest was quite devastating and several were shot and by the 13th August, many men had died as a result.

The performance had it all. Astonishing really, that two actors on a small stage could convey so much in a matter of 50 minutes. Their effortless performance was emotionally charged and entirely absorbing for the audience. 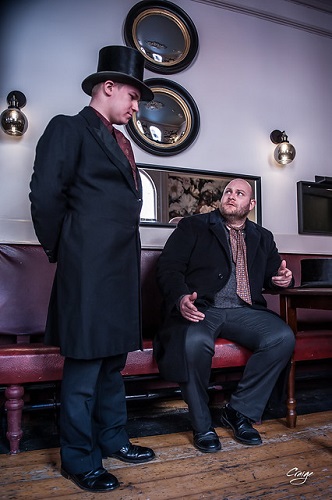 This was a gripping piece of theatre and it was hard to take your eyes off the stage at times. It was perhaps necessary but particularly powerful that the actors had brief costume changes on stage. It allowed the audience to prepare for the changing characterisations of each actor.

The characters themselves were very fitting of the Victorian era. Both performers played two characters each. The fabulous Christopher Ward was larger than life in his performance as Samuel Horrocks. His stage presence as the mill owner was intense and his anger and frustration was palpable to watch. Even when he did not speak the audience could easily understand how he felt through his entire demeanour on stage right down to his piercing eyes. By contrast his portrayal as The Mayor of Preston attempted to show he was a leader but perhaps unnerved by the situation, he was somehow struggling emotionally with the situation he was presented with.

Jake Talbots part as George the from the offset was fresh, engaging and had an abundance of youthful energy in the way he was outraged at the injustice that was happening in the cotton mills and he was ready to fight. A beautiful contrast to this character was shown in his portrayal as Denholm. Denholm was in some ways the ‘conscience’ to The Mayor of Preston and showed superiority in his part. Both actors portrayal encouraged the audience to address all aspects of the protest and the reasons for it.

Johnston must be applauded for the writing and directing. The very simple set merely allowed the actors to tell the story. The injection of humour amidst stories of protest, deaths, and utter horror amongst the workers at this time was clever indeed. The passion that was instilled in the part of the cotton workers was heart wrenching, particularly in the way they expressed pure rage at each other.

The Riot Act is a fine example of fringe theatre at its best. This is the sort of theatre that is a pleasure to support. A questionnaire at the end of the performance asked the audience what would we do differently as a result of the show - I would certainly be more appreciative of this challenging period in History and it has encouraged me to delve deeper. The Riot Act is well worth seeing and for me, served as a wonderful visual, historical education aid.