Charlotte Josephine, Ian Townsend and Shauna Mackay were the first winner of the Octagon’s National Prize that aims to showcase new writing, although it might have been a braver choice to have at least one winner who was actually a newer writer.

Maybe playing it safe was the right choice as monologues are tricky for writers, performers and audiences. It’s a big ask for an audience to sit through an hour of dialogue delivered by one actor on a basic stage, which Bennett can get away as he is a master craftsman, but can the prize winners pull it off?

First up is Josephine’s Blue about the trials and tribulations of bolshie teenager Amber fighting the twin demons of an alcoholic mum and her own hormones that leads her to make some bad choices that threaten to overwhelm her. Along the way Amber discovers the ability to taste colours that makes her chaotic life a bit more bearable, but will it be enough to save her? 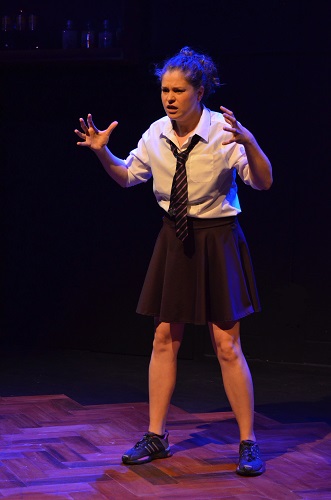 There is a danger of this getting all a bit Waterloo Road but Josephine’s sharp writing really gets under the skin of a talented but damaged young woman without ever patronising Amber. Jessica Baglow delivers a powerhouse performance that is utterly believable capturing the gawky awkwardness of the teenage body, and focusing on the unbearable social pressures young women face as they are endlessly bombarded with images of supposed perfection.

I was never entirely convinced by Tupele Dorgu when she was on the Weatherfield cobbles, but she makes the brash Yolanda her own in Mackay’s bittersweet Nobody Can Ever Get Us Back. We all know a Yolanda who mistakes a natural silence as a chance to endlessly prattle on about nothing as Mackay cleverly traces her tough upbringing as she takes care of two daughters, a feckless husband and 17 rescue dogs.

The seemingly irrepressible Yolanda is hiding a dark secret she is telling to a local copper, and the personable Dorgu skilfully navigates the humour, anger and pathos as the suddenly brittle Yolanda goes round the houses of her life rather than tell the awful truth.

17 year old Leon is sure his day is going to be amazing although events conspire to make it less so in Ian Townsend’s Being Amazing. There are echoes of The Curious Incident of the Dog in the Night-Time as Leon battles with his tenuous grip on reality, and  dealing with his Kate Bush obsessed mum as he tries to score her tickets for the legendary singer’s comeback concerts.

It might not be an amazing piece although Michael Peavoy’s sympathetic and physical portrayal of a good hearted outsider is funny and moving. And who wouldn’t like a monologue with some classic Kate Bush tunes thrown in.

It’s easy to see why the writers won as the dialogue is of a consistently high quality with plenty of laughs along the way despite the subjects being damaged in their own ways. All three actors deliver powerful, nuanced performers that on the whole steer away from stereotypes to make their characters very human.

Having seen both sets of monologues, whilst I appreciated the quality of Bennett’s writing they feel like a dispatch from a world that doesn’t really exist anymore, but  this triple helping of new work all feels fiercely contemporary, and linked to chaotic lives where people do have social workers or underage sex.