Christmas has come early this year, as writer Neil Duffield and director Ben Occhipinti’s adaptation of Charles Dickens’ classic tale arrives at Bolton’s elegant Octagon Theatre. The story needs no repeating, especially for a generation reared on the beloved Muppets film. However, for the benefit of those deprived Muppets children, the story unfolds thusly: the miserly Victorian businessman Ebenezer Scrooge is visited on Christmas Eve by three ghosts, who show him his past, present, and possible future. Shocked by these visions, the repentant Scrooge vows to change his ways, and everyone lives happily ever after.

A Christmas Carol, then, must surely be one of the most frequently adapted of Dickens’ tales. Its characters have seeped into the public consciousness. The challenge in adapting any piece of material so well-known must therefore surely be enormous, not least because the onus is very much on the production to justify itself. What do Duffield, and Occhipinti bring to the Christmas dinner table that we haven’t seen many times before? The answer must be “not much” followed swiftly by “but that’s okay”. 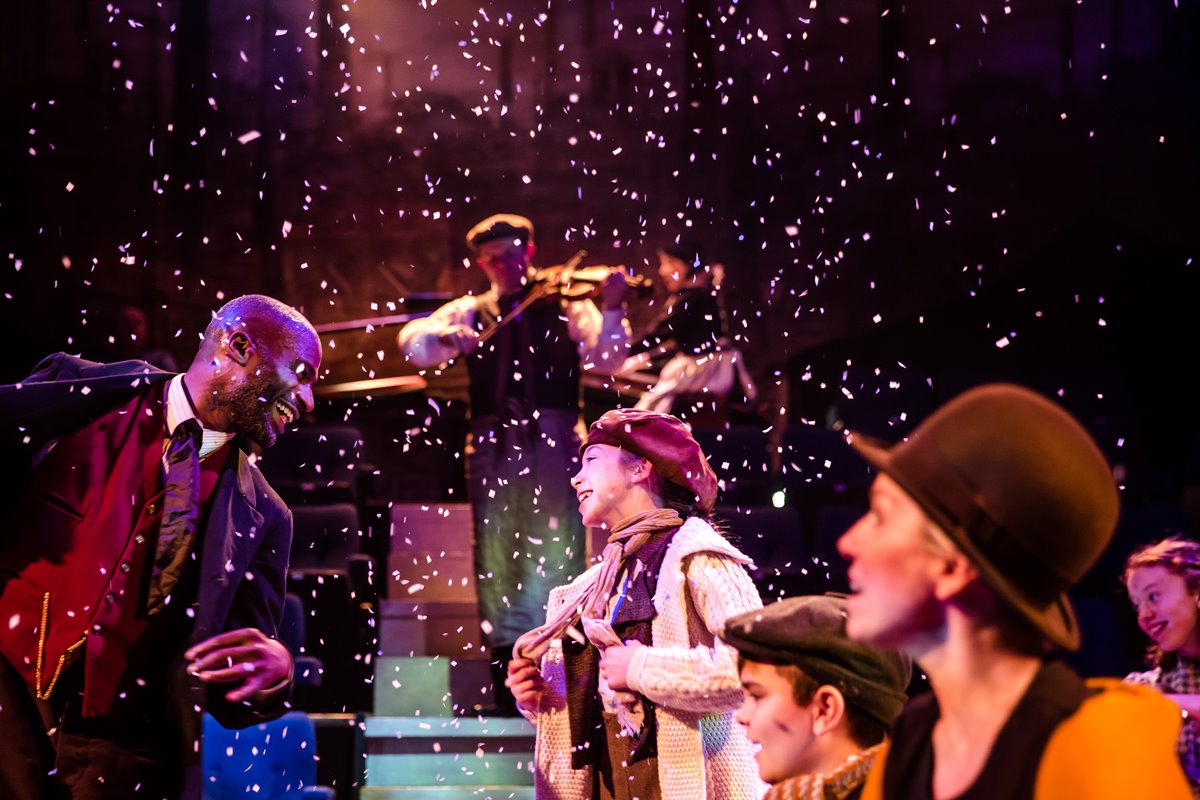 Rather than re-present the story with a theatrical gimmick (for example, changing Scrooge’s gender, or placing the story in the present day), the writer and director allow Dickens’ story to stand on its own merits. It’s a mark of the confidence placed in both the power of the story and the abilities of the performers that there has been so little extra embellishment.

And this confidence is justly rewarded. Marc Small makes an engaging Scrooge, playing the character with the right mix of harshness and comic sympathy. The rest of the cast multi-role with dexterity, and special praise must be given to Sue Devaney (The Spirit of Christmas Present) and Robert Jackson (Jacob Marley), who inject their roles with warmth to instantly capture the audience’s attention. Many of the performers also double as musicians, and the atmospheric use of music is the production’s main strength. It was the Christmas music and exciting costumes which set the Victorian Christmas tone, because the set although efficient, didn’t quite consistently transport the audience to the physical world of the play – a difficult task, however, for such an intimate and interesting performance space. Moreover, it is the use of lighting and effects which helps to create a festive fantasia that will surely enthral younger audience members.

One of the production’s chief virtues is that it doesn’t outstay its welcome. Clocking in at just under two hours (interval included) the acts are judiciously timed, and the performance leaves its audience at just the right moment: where they have warmed to the characters and would happily spend more time in their company. However, though the final scenes were quite affecting, the performance could have ended with a more rousing recital to leave the audience in no doubt of our happily ever after. As it was, it felt slightly under energised, and didn’t quite match the vivacity of the rest of the show.

I don’t want to end this review on a note of humbug. Suffice to say, then, A Christmas Carol is precisely what one would expect: enchanting family entertainment for the festive season.