Liver Birdsong gives us 'hope out of hell'

The story centralises on four strong women, who work at a factory in Liverpool during the second world war. We see their journey through what was described as “the single worst civilian incident of the war.” - Churchill.

This is the world premiere of Liver Birdsong, to commemorate the 75th anniversary of the blitz, it's a brand new musical from father and daughter Tony Bradley and Rebecca Myers.

On arrival at the theatre it had been decorated accordingly with a real wartime feel, union jacks and acoustic music in the bar area, setting the ambiance. A musical in 3 acts, featuring 18 original songs with a live band led by Alan Moore.

For me the 'birds' Maggs, Daisy, Carla and Lil, were very well cast and made the show, there chemistry with each other was superb. They were under the direction of Jodie Marshall.

A comedic performance from Kate McHenry as Maggs William, showed great light and shade at points moving us to tears. Her performance could be compared to a young scouse Julie Walters.

A lovely Carla Evans played by Sophie Gaudie, with a sweet youthful vibrato. Daisy Mae Beech played by a tall slim Katie Burke gave us a believable character. Rachel Jones as Lil just one example of the effort put into the authentic appearance of life in the 1940s, elegant sophisticated costuming and hair styling that wouldn’t be out of place on a pin up poster.

Mia Molloy gave the audience fantastic characterisation as Mrs Williams, wise beyond her years. The show also featured 6 children playing evacuees, they brought great energy to the stage and the sadness where required.

Costuming at times very minimalistic but it was effective and gave an authentic feel. The splashes of yellow worked well in an otherwise drab colour scheme. The set was pretty much the same throughout utilising a metal scaffolding whilst projecting various images onto the back wall. Which we couldn’t see very well at some points but when we could it brought us some poignant moments, including a list of all of the names of the deceased from the Durning Road bombing and a clip of the Liverbirds flying.

Choreography by the talented Natalie Dignam, who also Danced in the show, my eyes pulled to her every time she was on the stage, beautiful feet and technique especially throughout the partner and lift work., I particularly enjoyed the small bit of tap dancing in the factory scene.

My only criticism being I struggled to hear certain parts of the show specifically during the songs, which seemed to be a problem with balancing of the microphones.

We finish just before the interval in the air raid shelter, the sound effects here play a vital role, in telling the tale, I thought this section was perfect, and the expression on the actors faces made us feel like we were there with them. The makeup after the interval really helped to set the scene, very effective. All four men in the cast did a great job, most of them multi-rolling.

Why do swallows fly in September? A beautiful melody to finish the show, featuring fantastic harmony lines, it was a pleasure to see a very young cast, mostly local professional actors. Which in turn provided us with native accents.

I feel Jodie Marshall's job would've been made easier with a lot more scenery and use of props, they did very well with what they had, but being set in a factory they could’ve done with a few more pieces of set.

The performance was a fitting tribute to the events of the blitz and a true reflection of the scouse humour. 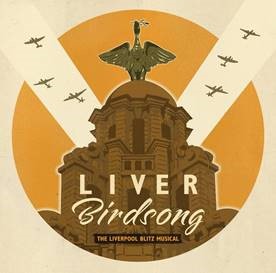