Buddy: The Buddy Holly Story is without doubt the original ‘Jukebox Musical’. Written by Alan James and debuted in 1989, the show is a retelling on the life of Rock and Roll Legend Buddy Holly.

This is a show of massive contrasts: on one hand we have a multi-talented cast of musician/singers that bring the Rock and Roll back to life with relative ease. Glen Joseph is a veteran as Buddy Holly. He doesn’t resemble him physically but having played the role for many years it is fair to say that he is a true showman who brings his own personality, style and vibe to the Holly’s back catalogue including: ‘Everyday’, ‘Raining in My Heart’ and ‘Peggy Sue’.

On the other hand, whilst the vocals and musicianship is outstanding from everyone, the tired and dated script distracts massively from what could actually be a great ‘tribute-type’ show. 1950s America was a time of change; of great divides in society; segregation and challenge but this show does nothing more than a gentle nod to this within the writing which is a great shame. I feel this potentially contributes to the one dimensional nature of the text which does no more than document Holly’s timeline. Weak dialogue is common within a jukebox musical but James script particularly left me wondering if I should go home during the interval. 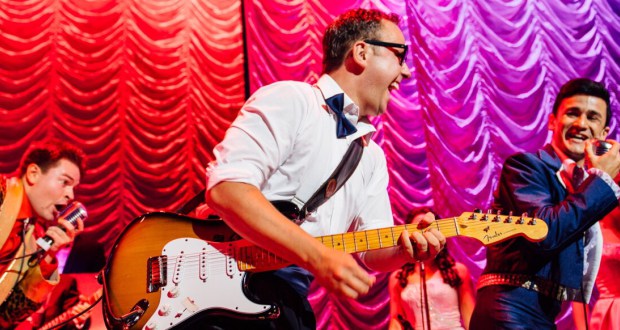 I did persevere however and am glad that I did as Act Two is certainly where the action is as we are immersed in what is predominately musical numbers, and treated to exceptional performances from The Big Bopper (Thomas Mitchells) and Ritchie Valens (Jordan Cunningham who totally stole the whole show. Supported by the full Band and high energy backing singers, Cunningham was an absolute delight to watch with an exciting and physical rendition of ‘La Bamba’ that knocked the other performances out of the game. Mitchells’ ‘Chantilly Lace’ was very impressive. He is a talented performer who manged to multi-role throughout the show with skill.

Adrian Rees’ set design is very different across each Act: in Act One it is very basic and dated, with furniture pieces on casters pushed on by hand with lots of long transitions. I couldn’t help think this was technically weak in an age of magical set design. Act Two shows us simple silk curtains and very effective lighting from Darren ‘Daz’ Coopland that transports the audience back to the 1950s and which was much more pleasing to the eye. There were also some sound issues in tonight’s performance with radio microphones fading in and out frequently, and at one-point Joseph completely lost his microphone resulting in a very well managed full voice performance.

Overall, this is a likeable Jukebox Musical that is in desperate need of an overhaul to bring it in line with modern theatre standards. The quality of the music naturally keeps the show likeable but it won’t stand the test of time for much longer unless someone redesigns; rejuvenates and restages it.