This one act, two-person musical tells the tale of a young New York couple, Jamie Wellerstein, an up and coming novelist (played by Graham Tudor) and the bubbly but struggling actress Catherine 'Cathy' Hiatt (played by Helen Noble). Its unique style is in the way that the character’s stories are told separately, the twist being that the stories are told in opposite ways to each other, with Wellerstein’s account told chronologically from the exciting start of their relationship through the bitter sweet rollercoaster of emotion to its conclusion, whilst Hiatt’s version of events begins at the end of their liaison to the budding optimism of new found love.

The Last Five Years was written by Award-winning composer, Jason Robert Brown and quite obviously so with echoes of other Robert Brown musicals evident in parts of the show. As a fan of Robert Brown’s work and a keen interest in the concept of this musical I was interested to see how the play would unfold, whilst keeping the flow of the two disjointed storylines.

I felt that the performers managed to keep the flow of the story, and they both had good voices. The story itself was quite stereo typical, with the self-absorbed un-endearing Jamie and the clearly besotted Cathy, who gradually unravelled throughout the duration of their relationship, until the point where she became the caricature of the 'nagging wife', the saving grace of the story being the piecing together the separate pieces of the jigsaw to make the story 'whole'. 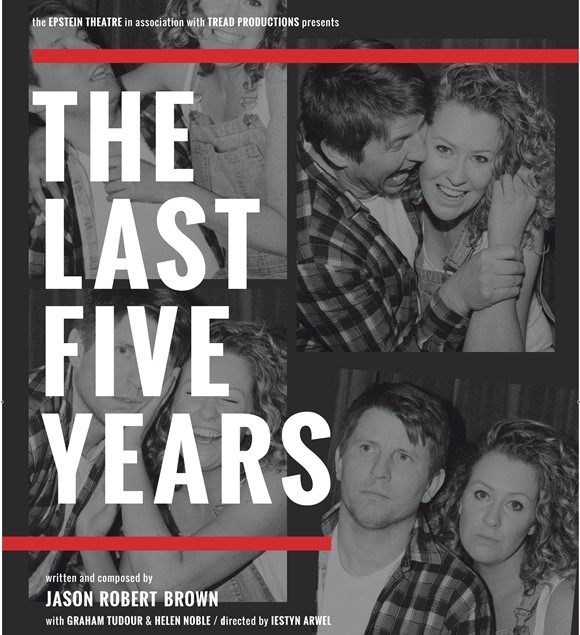 The intertwined story arcs within the play meant that each song was an act in itself with the characters only being on stage together at the same stage of the relationship at the midpoint of the play for one song. This midpoint was intended to be pivotal, gelling together this couple, holding the story together and giving some authenticity and context to the individual and personal glimpses of the relationship that we see before us. I was however slightly disappointed with the lack of onstage chemistry between the two actors, especially given that Tudor and Noble are a couple 'in real-life' but sadly this central point failed to deliver.

The actors were accompanied by a four-piece band, who were situated at the back of the stage. Which I feel was out of necessity due to the size of The Epstein, however, this impeded the intimacy of the two-person production, intimacy being something that The Epstein is usually perfect for. An example of this was the point where Jamie is giving Cathy the watch, a beautiful, still, moment; which was affected by the conductor bobbing up and down at eye level at the back of the stage.

I felt the personal photos and videos of Tudor and Noble's own relationship and marriage, which were shown on a screen during the last song of the play added a nice pinch of sentimentality to the plays ending.