A little bit disco, a little bit rock n' roll – as Catherine Jones, Liverpool Echo's Arts Editor pointed out to me: 'Not really ballet at all. It's Matthew Bourne. It's a show.'

And so it is - heresy alert - speaking as somebody inclined to dismiss ballet as 'nice tunes, shame about the dancing'. For a start, or rather, from start to finish, the staging is superb, opening in the sumptuous interior of Cinderella's family home, then plunging us into the vast outdoors of London in the Blitz, vividly depicted, with the surreal touch of a pack of Gas Mask Dogs. Then on to a magically realised Café de Paris, coming back from the dead in an amazing scene, followed by various London locations and a convalescent home, ending in a railway station, chapeau bas to Brief Encounters. One small quibble, all that rampant activity around Oxford Circus, wouldn't it have been Piccadilly? Then again, I'm not a Londoner. 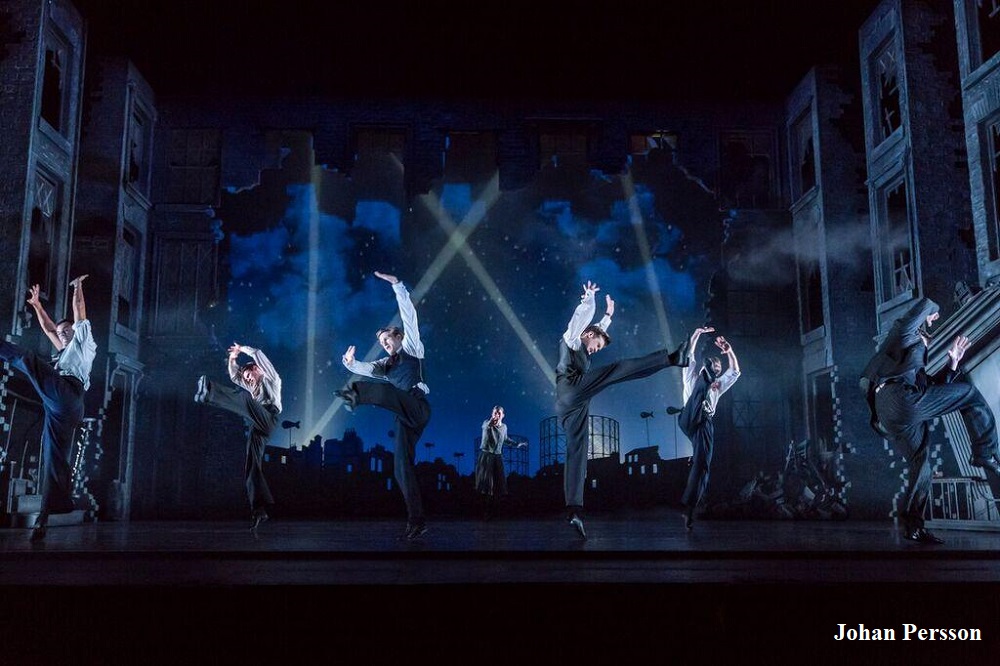 As for the costumes: absolutely exquisite and all the more so for being mostly monochrome, like the scenery and furnishings, apart from some glaucous uniforms; and how often do you get the opportunity to employ a word like that? Even if the grey of austerity is somewhat contradicted by its lush rendering, everything does appear to be black and/or white, including Cinderella in two key scenes, yet another fascinating twist, considering the connotations of the former. Ashley Shaw is herself superb, evolving from downtrodden, timid librarian lookalike to sparkling heroine, matched by Dominic North as Harry, the Pilot. He in turn is flanked, in true Bourne style, by friends Tom (Edwin Ray) and Dick (Will Bozier). We're also given an Angel rather than a Fairy Godmother, but after all, 'Godfather' is another word laden with implication. Hero and heroine are almost in danger of being outshone by the splendidly athletic goodie, Liam Mower, with Alan Vincent sizzling as the flamboyant Alphonso, the Bandleader at the Café de Paris.

The Blitz setting updates the traditional tale and makes it more fascinating, particularly because everything is sprinkled with the fairy dust of wit as well as being spiced up by a frisson of the sensual, along with plenty of subversion. So, no Buttons either, or grand transformation, and in the Pilot's Lodgings scene, it's not just her shoe which Cinderella loses. On the plus side, indeed, there's a plethora of stepbrothers, and the Ugly Sisters are stunning (still mean girls though); one suspects 'Irene' (Sophia Hurdley) is as much of a gesture towards past glamour as is 'Vivien' (Anjali Mehra), whilst Madelaine Brennan, outstanding as the Stepmother, Sybil, is naturally a mixture of bitchy and witchy. And very, very drunk.

Matthew Bourne has clearly had such a lot of fun with this, even popping in some Michael Jackson with a touch of moonwalking and a whiff of Thriller. And all audiences will too, balletomane or philistine. You should go to the ball – it's a jolly good show.