The Habit of Art - Liverpool Playhouse

Having premiered at the Lyttelton Theatre, London in 2009, Alan Bennett’s ‘The Habit of Art’ began its five night run at the Liverpool Playhouse on Tuesday.

Set in a rehearsal room, this multi-faceted play within a play, explores a range of issues including friendship, sexuality, creativity and loneliness.

The cast are in the midst of rehearsing a play called ‘Caliban’s Day,’ which shows a fictitious meeting in Oxford in the 70’s between poet WH Auden, played by Fitz (Matthew Kelly) and composer Benjamin Britten, played by Henry (David Yelland). Two of the company’s actors are missing from the rehearsal meaning Kay, the Stage Manager (Veronica Roberts) and her assistant George (Alexandra Guelff) are having to read in lines leading to a particularly amusing scene where they bring to life Auden’s bed and chair.

The director of ‘Caliban’s Day’ is also not in attendance resulting in the cast hilariously fumbling their way through the scenes. The author of the play Neil (Robert Mountford) arrives late and becomes frustrated to find that someone has cut certain parts of his script out because they don’t deem it important and added rather crude lines in, including a hilarious scene where WH Auden mistakes Humprhey Carpenter (John Wark) a BBC journalist for his rent boy. 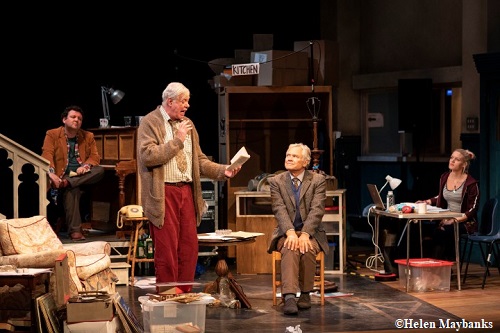 Anyone who has ever been in a rehearsal room can appreciate the accuracy of some of the disruptions to the rehearsal process. Tim (Benjamin Chandler) is an ambitious actors who struggles with the lack of stage direction for his character constantly seeking guidance as to where he should be at certain times. Meanwhile Fitz, a middle aged actor constantly grumbles, asks if it’s necessary for him to be in his costume, berates his fellow actors, breaks out of character to question the authenticity of the script and looks for a quick getaway so he can record a voiceover for Tesco. Fitz, also ironically forgets his lines leading to Henry to exclaim ‘He’s playing someone who forgets his lines, the audience will think it’s inspired,’

As the rest of the cast grow irritable at the slow progress of the rehearsals, Donald announces he has an idea to develop his character of Humprhey Carpenter. Kay decides to momentarily call time on the rehearsal which offers an appropriate time for a real interval. The 2nd half opens with Donald parading onstage in drag, whilst singing and playing the tuba badly to the horror of his fellow cast members and to the amusement of the audience.

The writing of this play is superb at portraying the delicate mind set of creatives from all disciplines and the similarities of the insecurities of WH Auden and Fitz are expertly illustrated by Matthew Kelly.

The rehearsal moves to the pivotal point of the play, an imagined meeting between WH Auden and Benjamin Britten. Britten is composing the opera ‘Death in Venice’ and approaches Auden having not seen him for 30 years. The pair reminisce about their past friendship and Britten expresses his apprehension about whether the audience will fathom that the theme of the opera is actually about his hidden desire for boys and young men. Auden, who is much more forthcoming about his sexuality misreads the situation and believes Britten wants him to write the libretto.

It’s a tough enough job playing one character in a play but the cast deserve plaudits for the manner in which they fluctuate between the two characters they each play. Special mentions must go to Matthew Kelly and David Yelland, who are excellent throughout and really demonstrate the complexity of their characters with perfection.

The complex layering of this play keeps the audience on their toes throughout and also means that a written review hardly does it any justice at all. The whole cast must be praised for their ability to act as though they are acting, having to essentially play two parts and learn two lots of script, the real play and the play they’re rehearsing.

The designer of ‘The Habit of Art,’ Adrian Linford does a superb job of recreating a rehearsal room set in a church hall, complete with fire exit, cheap props and contrasting dated and modern furniture for the set of the imagined play.

It may appear that this play is difficult to follow, but Bennett’s writing and Philip Franks’ directing offer an accessible and side splitting production which is both heart-warming and thought-provoking.