The Canterville Ghost - The Casa, Liverpool

The Canterville Ghost is Oscar Wilde’s classic comedy of an old fashioned English ghost trying his very best to terrify a thoroughly modern American family when they move into the house he has haunted for over three centuries.

Performed by Magpie Theatre and directed by David Jones, this hilarious version had the audience laughing out loud from beginning to end.

Beginning in an immersive style with the butler welcoming the audience into the Canterville house, the eerie atmosphere was portrayed from the beginning with lurid green lighting and dusty cobweb covered curtains.

When Mr and Mrs Otis (Alex Webber Date and Solenna le Goff) arrive to look at the house, much fun is made of the manners and habits of both the American and the British. Loud declarations of the merits of the stock market by Webber Date are met with derision from the stereotypical stoic butler who boasts about the antique damp and draughts the house has to offer. The butler of course also mentions the ghost who haunts the house, but Americans are people of science and such stories are not worthy of consideration. 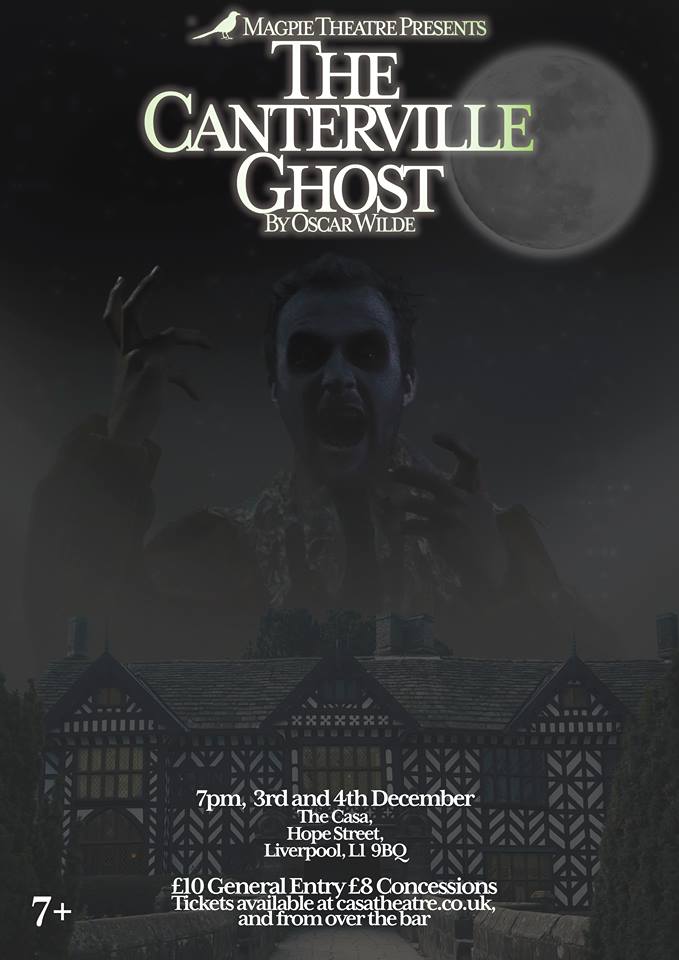 Despite Mr Otis’ reservations, Mrs Otis is determined to have the house, so they take it, ghost and all. They move in with their three daughters, the serious and melancholy Virginia (Immi Wignall), and precocious twins, affectionately nicknamed Stars (Ella Rose Norridge) and Stripes (Shannon Flynn).

Their new housekeeper, Mrs Umney (Angela Hehir), tells them of the terror the ghost subjects her to before violently fainting. Dismissing her reaction as hysterics caused by the miserable British climate, the family settle into life in their new home.

That night as they try to sleep they are disturbed by the rattling chains of Sir Simon de Canterville (George Parsons), the ghost they have all heard so much about. But, rather than reacting in terror as he expects them to, the family are nonchalant, offer him oil to lubricate his creaking chains so they can get some much needed sleep and invite him to brunch the next day.

The ghost, furious at being brushed aside, swears to begin a reign of terror which will destroy the family’s sanity. Instead, the Otis twins begin a series of practical jokes and assaults on the ghost which gradually break him down to a shadow of his former self.

This leads to him developing an unlikely friendship with Virginia, who is fighting to get out of an arranged marriage, and instead marry the Duke of Cheshire (Cameron Steen) whom she is deeply in love with, much to her father’s disgust.

Political jokes about the Republican Party bring a wry contemporary relevance to the comedy of the play. The anti-aristocracy views of the American family, together with their hatred of history and dismissal of art, create a caricatured portrayal of the fine upstanding American family.

Parsons’ theatrical performance as the ghost stood out for its many layers of comedic technique, including a great deal of physical comedy, providing plenty of slapstick humour, paradoxical Shakespearean style soliloquies and childish temper tantrums.

Webber Date’s infomercial style descriptions of the various products connected to companies he has shares in were fantastically done. Illustrating the commercialism of the world of business, his loud and proud declarations of the brilliance of the next big thing made fun of fad culture and people who care about money first and foremost.

Norridge and Flynn’s performances as the bratty vile twins were delightfully vicious, creating a true sense of empathy for the ghost of Canterville and his endurance of their continuance abuse.

Several tender moments and descriptions of the horrific events which have led to the Canterville Ghost’s life of haunting, gave a roundness to the play which created a very special piece of theatre.

You can find out more about Magpie Theatre at https://www.facebook.com/theatremagpie/