More Deadly than the Male consists of two plays written by Jamie Gaskin. Here is Thy Sting and The Budding Mantis feature an all-female cast under the direction of Sarah Sharp and explore how far people are willing to go when pushed to the limit as well as how the women can be far deadlier than men.

Both plays use a very similar set which nicely links the two together. The main feature of both sets is a bed which implies a sense of intimacy with the women featured in the plays.

In Here is Thy Sting the bed is in a hospice where Kate (Geraldine Moloney Judge) is dying of cancer. A successful accountant, Kate takes over the running of the hospice’s books and finds that they are in a mountain of debt. It isn’t long before the bank calls in the loan in the form of the cold and vicious Jane (Stephanie Pitchers) and Kate becomes desperate to save the hospice before it is too late.

The play jumps around time cleverly using lighting and sound to indicate flashback and moves forward in time. The non-linear nature of the play allows secrets to be revealed in an interesting way seen more often on screen than on stage. 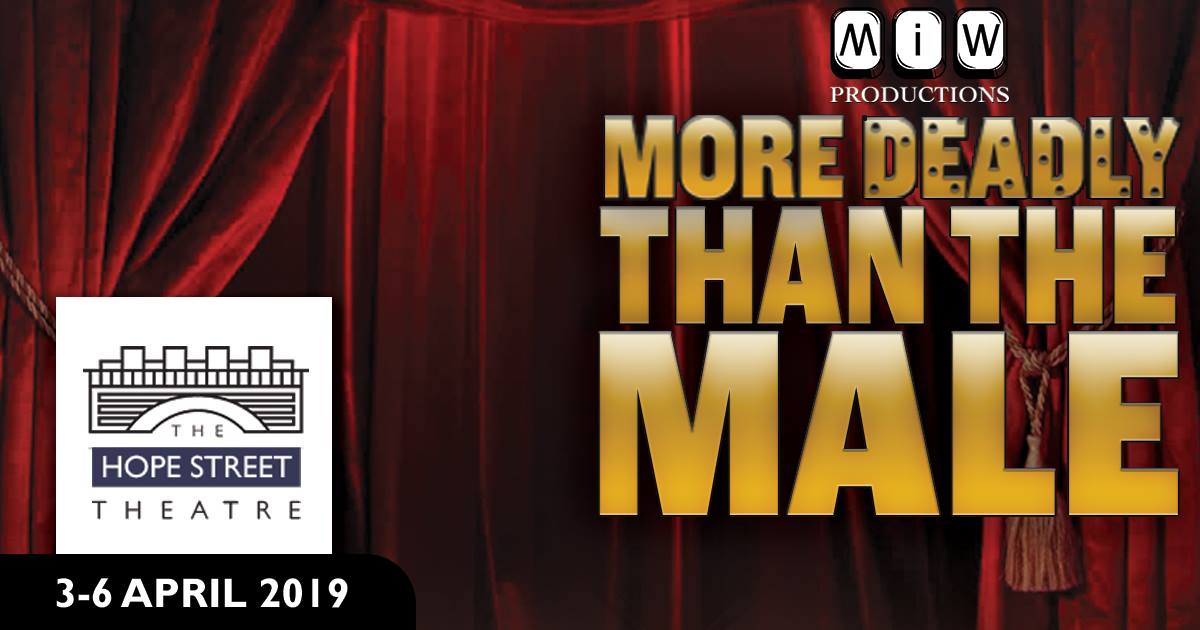 The conflict between religion and science’s roles in medicine are cleverly explored through the character of Sister Marjorie (Michelle Parker), a hapless nun and nurse who is determined to save Kate’s soul in order to restore her own faith.

Issues around social class are brought in through Tara (Rosanna Harrison-Pope) whose comical performance as the single mum on community service at the hospice was a lovely addition to the show.

Moloney Judge’s performance as a stoic and a determined woman who has accepted she is close to the end is excellent and Pitchers’ vicious portrayal is frighteningly captivating. The connection between these two women and their past and the struggle which happens when someone you look up to doesn’t turn out to be the role model you thought they were links very well with the themes in The Budding Mantis.

The Budding Mantis begins with Helen (Karen Sharples) dancing onto the stage singing along to Material Girl. She fixes her hair and make-up and vainly muses on her beauty, which has lasted even though she isn’t as young as she once was.

She is interrupted by the entrance of her daughter Charlotte (Amy Stout). Charlotte has recently started a new job at a law firm and Helen knows she has a successful career ahead of her. But Helen paid for Charlotte’s education using a series of wealthy “boyfriends” and it looks like Charlotte learned more lessons from Helen’s behaviour than from her fancy public school.

Helen is devastated to hear that Charlotte is in love and horrified to see the lacy black underwear she has bought to impress her new man, but she has no idea of how much Charlotte’s romance is going to affect her.

Costumes are cleverly used with both women dressed in red and black interestingly illustrating that the daughter is becoming the mother. Stout’s performance is reminiscent of Dickens’ Estella; cold, vicious, calculating and entirely a product of her environment. Sharples’ portrayal as a strong woman who is driven to and over the edge is well done.

More Deadly than the Male is a captivating portrayal of strong women. Employing melodrama and gently leading the audience through the stories, this is a good example of how short plays can work and create a thought provoking evening of theatre.

More Deadly than the Male is being performed at the Hope Street Theatre until on 6 April 2019. Tickets are available here https://tinyurl.com/yysq8zez