Death And All His Friends - Hope Street Theatre

From the get-go, you can consider yourself got! The audience files into this lovely little theatre – a relatively new addition to Liverpool’s vibrant cultural quarter - to be greeted by the sight of Jen, their host for the evening, patently dead, noose still round her neck. In a beautifully structured play by writer Ste Mc, directed by Sarah Sharp, her task is to tell the story of the building, interwoven with her own story and those of other characters who have met their end there.

Jen (Hayley Claire Warner) immediately takes charge, with a dark sense of humour and an even darker sense of mischief, introducing three vignettes – Voices and Life and Death before the interval, and The Price of Fame after. In each, there is a macabre twist, as there is in Jen’s own story, with strong performances from the cast throughout. 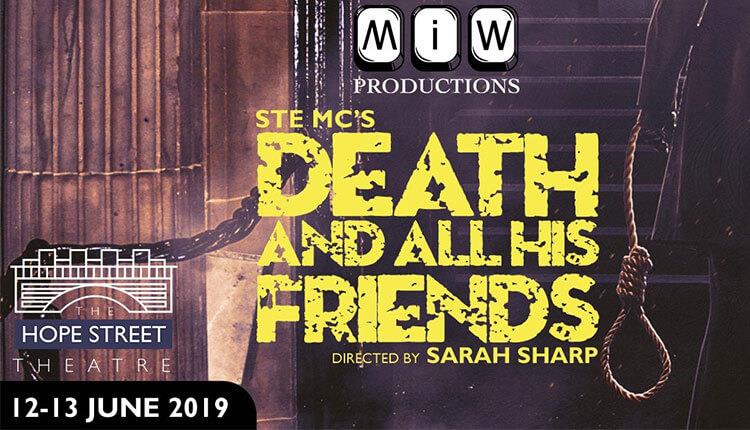 Laura Connolly takes on three separate roles; she is convincing as Dr Willow and as Ruth but really comes into her own, with exceptional comic timing, as the wonderful Shelley Franks. Andy McQuaker, Grant Ryan Lenton and Warren Kettle also give strong performances as Jonathan, The Policeman, and Simon the cameraman respectively.

As with any horror tale, the lighting and soundtrack are of crucial importance, and here they are of a very high standard throughout.

The production is part of the Hope Street Theatre’s ‘Pay What You Decide’ scheme, where the audience are asked to pay what they think the evening was worth, with a guide price of £12 (£9 for concessions) if the play met their expectations and the option to pay less if it did not, but with a request for feedback on the evaluation form regarding various aspects of the production. There were a few moments where it might have been better to let the audience’s imagination do the work, but that is a minor quibble in what is an evening of high drama, tension, and humour at a bargain price.