The Biggest Show in the Country - John Foster Drama Studio

‘The Biggest Show in the Country’ opens in LJMU’s John Foster Drama Studio as part of this year’s Liverpool Irish Festival. Tonight the cast shared that it was more of a ‘dress run’ ahead of their future performances and it is true to say that elements of this production felt a little ‘rough around the edges’ with pieces of set missing and lots of ad-libbing however there was also a lot to celebrate as these talented performers shared passion and energy to deliver a truly entertaining piece of theatre.

‘The Biggest Show in the Country’ is a comedy play featuring four Irish actors. The story is set in the rural village of Aghadowey, Northern Ireland and follows two families that live on adjoining farms, despite being culturally on opposite sides of the divide. In a fortunate turn of events, an oil discovery in their back garden sends both families and the whole world into frenzy. 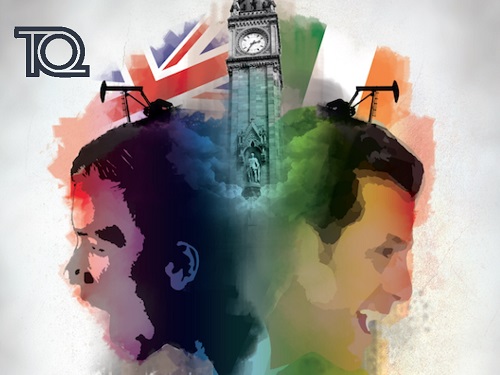 And despite Stormont being down for years and the UK long disengaging with Ireland, these two families receive visits and calls from every global superpower you can name. From Boris Johnston to Donald Trump, Michelle O’Neill to Arlene Foster and not forgetting Leo Varadkar, every part of the globe suddenly want to claim their allegiance to the wonderful ‘Northern Ireland’.

This show certainly is funny with over-the-top performances making the audience laugh, shake their heads and facepalm the whole way through. I really enjoyed the musicality and felt these choices, along with the strong choreographed movements, worked well in this powerful piece of drama. The technical team have a big role to play in this production with endless sound and lighting cues which was executed brilliantly and added variety, dynamic and character to this show.

Being an Irish reviewer, I probably got more than some others out of this show as I could complete relate and understand the humour in every reference. Speaking to other audience members, some references such as “The lodge” and “saying a novena” were lost on them however this did not deter from their enjoyment of the performance.

On a few occasions, I felt some of the comedy was slightly too farcical and the cast lost a little bit of quality however this is possibly due to the relaxed nature of tonight’s performance. There was a small audience and it was the first showcase for ‘The Biggest Show in the Country.’ In saying that, some of the ad-libbed moments really added to the piece and brought even more humour to an already silly night of fun.

Some of the ‘chitchat’ scenes were a little laboured however there was also some ingenious sections, namely the ‘V R Jesus’, a virtual reality headset where you can relive Jesus’ life, bought from the holy shop (of course). This had everyone bursting their sides and personally had me laughing all the way home. The audience participation section felt more like ‘scaring’ than ‘sharing’ but either way it worked and added further depth to this unique show.

All in all, ‘The Biggest Show in the Country’ is a good laugh and definitely worth watching. Without a programme, I know little about this drama group but I would certainly be interested in seeing their future productions. Good Luck for the rest of ‘The Biggest Show in the Country’, it runs Fridays the 25th of October for ticket information please visit https://www.liverpoolirishfestival.com/events/the-biggest-show-in-the-country-3/