Timed to coincide with International Women’s Day, Kitty Queen of the Washhouse, written by John Maguire and directed by Margaret Connell, is a one-woman show telling the story of Kitty Wilkinson (Samantha Alton), the saint of the Liverpool slums.

Born in 1785, she was like many of Liverpool’s ancestors, an Irish migrant, and whose life was laden with poverty, loss, and hardship. Arriving in Liverpool at the age of nine, she was sent to work in a Lancashire cotton mill at the age of twelve before returning to Liverpool at twenty to join her mother in domestic service. Despite enduring terrible grief in her life through the loss of loved ones, she developed an indomitable spirit inspired by the words of a blind lady she had been in service with and which were to resonate throughout her life. 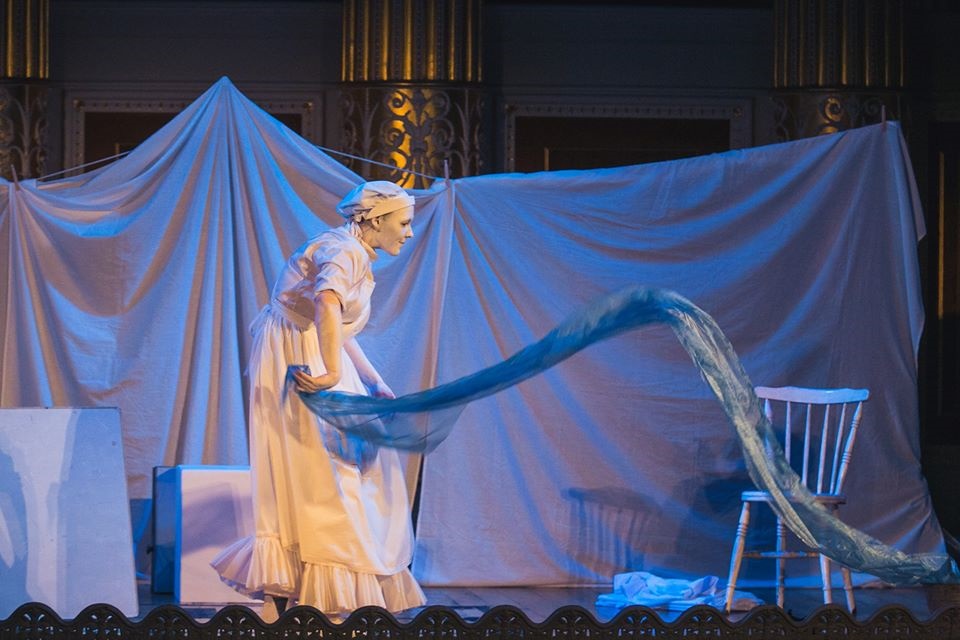 In 1832 when a cholera epidemic spread throughout Liverpool, Wilkinson opened her home up to her neighbours with infected linen and clothing, showing how chloride of lime and boiling water would get them clean. Convinced of the importance of cleanliness in combating disease, she was the driver behind the establishment of public baths and washhouses in Liverpool, of which she was made superintendent.

Following a lifetime of tending for the poor and sick, Wilkinson died in 1860. In 2012 she became the only woman to be commemorated with a statue in St George’s Hall and it was here in the rich tapestry of its Concert Room that Alton, covered with a layer of chalk white make up, breathed life into the marble portrayal of the Queen of the Washhouse.

White sheets draped around the set subtly reminded the audience that this was the story of a woman who had passed whilst also creating a background for the washhouse with the simple use of props to provide touches of colour as the story was brought to life through a number of techniques including projection of photographs to illustrate the reality of Kitty’s world; shadow work behind the sheets; lighting and audio effects to create the stormy weather of the boat crossing from Ireland as well as changes in mood; and voiceover. There can be a risk in doing too many things but here I thought the balance was just right.

There are challenges with a historic venue and the sightlines in some instances weren’t ideal and further compounded by the positioning of set pieces and props, so it is worth reviewing the staging and blocking. Some of the voiceover elements were not always intelligible although this did not detract from the production whose success ultimately resides in Alton’s performance.

I have been aware of Alton for several years, first encountering her when she ‘rescued’ a play by stepping into a lead role with under 24-hour’s notice: you couldn’t tell as she outshone the rest of the cast. We were not let down here either with a strong performance that captured not only the strength of Wilkinson but also the moments of fragility with subtle changes in her intonation highlighting the wit and determination of her character, whilst providing insight into the world around her. Her physical acting was a delight throughout from reflecting the motion of the ship rocking violently at the beginning to the subtle use of props to weave us superbly through the intricate story of this extraordinary woman.

Kitty Queen of the Washhouse was produced by ArtsGroupie CIC, a Liverpool based Production Company who promote accessibility and education through the arts. Further information https://www.facebook.com/ArtsGroupieCIC/