The National Theatre are currently streaming their 2015 devised production of Jane Eyre on their YouTube channel. A co-production with Bristol Old Vic, this unique interpretation of Charlotte Brontë’s classic novel was directed Sally Cookson.

The simple set of wooden platforms and ladders show us from the start that this is not a typical period drama version of the story. At the centre of the stage sit the band, the music they play, under the direction of Musical Director, Benji Bower, being an important part of the show throughout. Often haunting, the soundtrack exploits some of the novel’s more subtle themes in an interesting and original way.

Throughout the play the actors utilise interesting physical theatre techniques to create atmosphere, pieces of set and movement through the English countryside. This, together with cleverly used lighting and sound, mean that the seemingly plain wooden platforms become houses, Lowood Institution and the Yorkshire moors seamlessly. 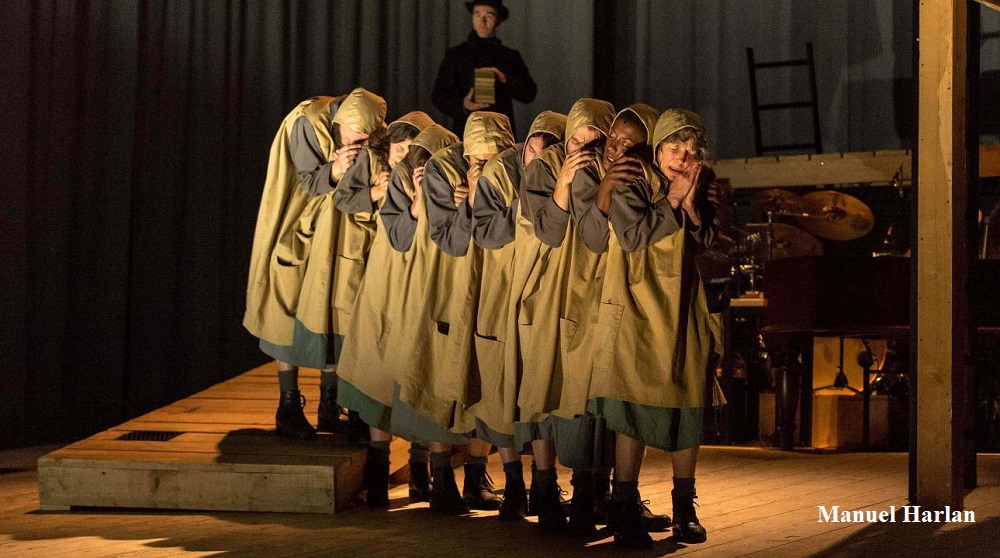 The lighting used to create the vital weather patterns of the novel and the red room is particularly good. Sound is used to symbolise Jane’s (Madeleine Worrall) discomfort on numerous occasions and echoes of the past throughout the play create a disconcerting and absorbing atmosphere.

The actors utilise very broad Yorkshire accents to create the setting of the piece. As Jane grows into a young woman her accent subtly refines as an indication of her education. Different accents are used throughout the piece to illustrate the class of some characters and the miles that Jane travels throughout England.

Bertha Mason’s (Melanie Marshall) haunting laugh, as always, echo through the hallways of Thornfield, but the Gothic themes of the novel do seem somewhat neglected in the interpretation and, while hinted at, are never fully realised, with the performances instead tending towards melodramatic horror on occasion. Ghoulish faces give the piece an unnatural feeling which does not contribute to the exploration of the themes or characters as well as a more realist interpretation could have.

Dark humour throughout the piece gives a roundness to the world which Jane’s craving to escape the darkness of is illustrated through the throwing open of windows created by empty frames held by the cast. Her internal monologue is spoken by other cast members, which gives us some of the insight we have lost from the novel’s first person narration, and nicely illustrates the inner turmoil that Jane struggles with throughout the story.

The chemistry between Worrall and Felix Hayes, playing Mr Rochester, is very good and bends well whenever the dark, disturbing and controlling elements of Hayes’ character are exposed. Marshall’s haunting vocals follow the two lovers throughout their courtship and serve the explore the mental state of Bertha. This gives an interesting angle to the mental health elements of the story, giving Bertha the voice she does not have in the original novel due to its first-person point of view.

Laura Elphinstone, playing various roles, gives a stand-out performance, particularly as Helen Burns and Adele. Her commitment to the characterisation of each role is sublime and her ability to change her physical presence and accent to illustrate the different characters is fantastic. Creating many of the stronger emotional moments in the piece, Elphinstone is a credit to the Company and the show as a whole. Craig Edwards, also plays various roles, including the memorable Pilot the dog, a work of genius in terms of the portrayal of emotions, vocal talents and physical theatre.

This is an original interpretation of an old story, which removes the romantic elements, often performed, but unlikely to ever have been intended by the original author, and replaces them with a detailed exploration of Jane’s all-encompassing need to both find the freedom she craves and the secure home she desires, the flawed, controlling and potentially violent character of Rochester, and the desperateness of Bertha and the effect her illness has had on her. These are three characters who are inextricably and tragically entwined and this visit to their world will change how you view their tale forever.

Jane Eyre is being streamed on YouTube until 16th April 2020 https://www.youtube.com/watch?v=mO0CXV0zEAQ