Royal Opera House commissioned Benjamin Britten to write a piece to celebrate the coronation of Queen Elizabeth II in 1953. The resulting Gloriana focuses on the two faces of Queen Elizabeth I as she nears the end of her reign: on the one hand, an intelligent and adept stateswoman and politician; on the other, an ageing woman worn down by duty and still desperately in love with the Earl of Essex but denied him. It seemed a somewhat unusual choice to celebrate the accession of a new, young monarch and was not particularly well received at the time.

Fast forward to 2013 and to celebrate the centenary of Britten’s birth and the 60th anniversary of the coronation, ROH chose to revive the piece under the direction of Richard Jones, who, clearly conscious of the challenges of the original, chose to present it as an historical pageant put on in a village hall at the time it was written, somewhere/anywhere in England, with the local mayor having invited the newly crowned Queen to attend the performance, which effectively frames the opening and close of the piece. 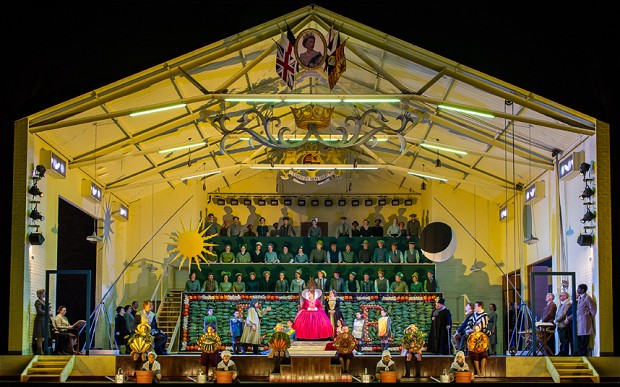 It is an interesting idea as we are presented with a play within a play but to me, the creation of the am-dram effects only serve to reinforce the shortcomings of the original. There is an awful lot of padding throughout the original, written in an English pastoral style which is rather dull and not helped by the clunking nature of William Plomer’s English libretto. Whilst Britten’s music bursts with invention, there are so many different styles and themes going on that despite the excellent performance of the Royal Opera orchestra conducted by Paul Daniel, it is hard to keep up with, and only further compounded by the addition of the 1950s post-war nostalgic theme.

Toby Spence gives us a strong, dashing Essex, making an immediate impression in the opening scene’s quarrel with Mark Stone’s Mountjoy. Clive Bayley’s understated Raleigh gives us the most sinister of the conspirators while Brindley Sherratt’s Blind Ballad Singer was a superb cameo. Patricia Bardon excelled as Lady Essex with great accompaniment from Kate Royal as her sister-in-law, Lady Rich. Wagnerian soprano Susan Bullock as Elizabeth offered a commanding and imperious performance but one perhaps with too much intensity and missed the opportunity to shine a light on the subtle nuances of Elizabeth’s character, and surely the crux of this piece, which was left instead to the costume and lighting to reflect.

The stage design by Ultz cleverly plays between the two periods: the 1950s reflected by insipid colours prevalent at that time and the comedy of a community putting a production on for an illustrious audience, perfectly offsets the dark psychological drama of the Tudor period as its tragedy unfolds. The supporting choreography alternately injects fun and pathos.

Gloriana is considered one of Britten’s lesser works and in my opinion reflects the fact that commissioned pieces in the arts per se generally lack a natural flow. Gloriana was only produced once more until this ROH revival in 2013 and it is easy to see why as this was effectively an average performance of an average opera. One has to question why during this time of lockdown when there is an opportunity to showcase the best of its work, to keep its existing audience engaged, and to reach out to a new one for when venues open again, ROH has chosen to put on such an average production when in its archive it can do so much better.