The next offering from Andrew Lloyd Webber's YouTube channel, The Shows Must Go On, is a screening of the concert held at the Royal Albert Hall in London to celebrate his 50th birthday.

As you would expect, there are some big names from musical theatre such as Michael Ball, Elaine Paige, Antonio Banderas and Sarah Brightman. There are also appearances from Donny Osmond, Glenn Close, Dame Kiri Te Kanawa, Boyzone and Bonnie Tyler and many others. However, this is more than a stand and sing concert, many of the numbers also feature ensemble performers. 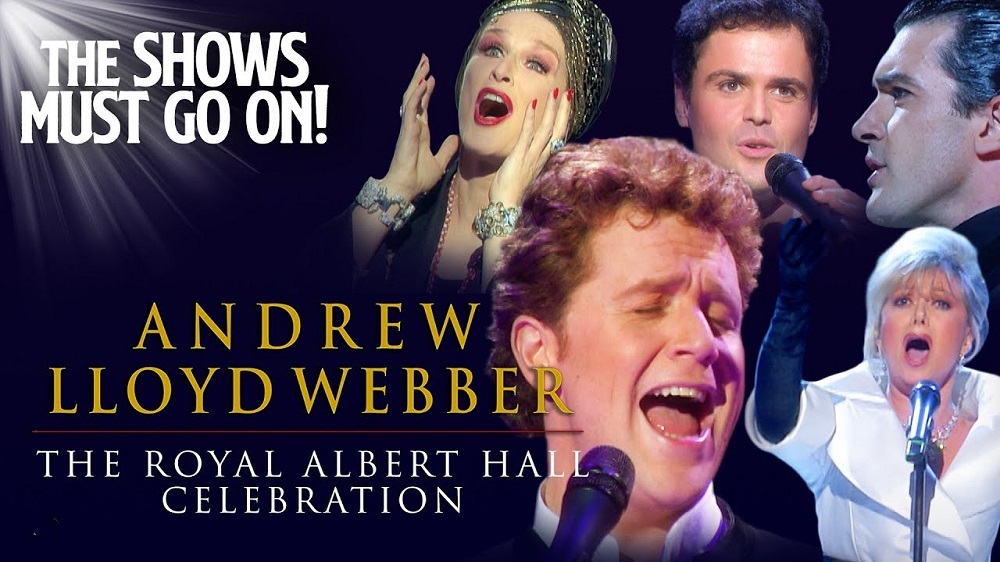 All the expected songs are included from shows including Evita, Jesus Christ Superstar, Cats, Starlight Express, Phantom of the Opera, a large section from Whistle Down the Wind which had just opened in the West End in 1998 and more.

There are some impressive performances. The Evita section features a large ensemble and is beautifully choreographed for a small area. Antonio Banderas gives a spirited and heartfelt performance. Glenn Close sings two of the big numbers from Sunset Boulevard, these are performed with feeling and emotion and it is clear she is totally in character. A young Michael Ball shows his star quality with a stunning performance of Gethsemane.

The performance area is static with none of the technology that is available now, and none of the dazzling sets or costumes that musicals fans are used to. This makes the music and performers the focus which is refreshing. Everything has a monochrome look; the only colour comes from the children’s balloons for the Joseph section and a splash of gold on the costume of Glenn Close.

This is an enjoyable selection of high-quality performances and music, an entertaining way to spend an evening without having to concentrate on a plot. For fans of Lloyd Webber this is a must-see concert. Playing until 7pm on Sunday 3rd May 2020 HERE!