Kenneth MacMillan created a one-act ballet Anastasia for Deutsche Oper Ballet in 1967, inspired by the true story of Anna Anderson, a woman who believed herself to be Anastasia, youngest daughter of Tsar Nicholas II, and the only survivor from the assassination of the Romanovs in 1918. Leaving the audience to decide the legitimacy of Anna’s claims, MacMillan created a haunting, expressionist work to Martinů’s Sixth Symphony, in which Anna is visited by confused nightmares of her life from the time of the massacre to her discovery in Berlin in 1920, and the ballet won widespread acclaim on its premiere.

Following his appointment as Director of The Royal Ballet, one of Macmillan’s first creative acts in 1971 was to adapt Anastasia into a three-act full-length work, creating two preceding acts to effectively set the scene of events for the Imperial Family leading up to the Russian Revolution. The result is a mixed performance of two halves: traditional classical ballet in the opening followed by German expressionism for the close, and it is unsurprising that after only nine performances in the 1970s, it was not revived for almost twenty years and then only twice in the two decades that then followed. 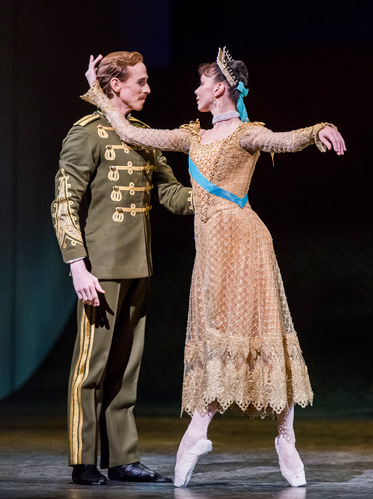 Watching it last night I couldn’t help but feel that MacMillan should have steered away from setting the scene with the addition of two opening acts that don’t progress the story and concentrated instead on further embellishing the truth reflected in the madness of the third act.

The first act captures the an idyllic afternoon on the imperial yacht just prior to the outbreak of World War 1, followed by Anastasia’s coming out ball in St Petersburg on the eve on the March Revolution some three years later in 1917, both acts accompanied by Tchaikovsky’s Symphonies 1 and 3. Bob Crowley’s design is impressive capturing the yacht with the sea beyond and waves splashing on to the deck followed by the richness of the palace with only the skewed chandeliers suggesting something is at odds.

Thiago Soares offers a brooding and sinister Rasputin in imagined duets with the Tsarina (Christina Arestis) and her four daughters: Olivia Cowley; Beatriz Stix-Brunell; Yasmine Naghdi, and Natalia Ospanova as Anastasia. There are hints towards other relationships between the Tsar (Christopher Saunders) and the great Mariinsky ballerina Mathilde Kschessinska (Marianela Nuñez), although the relevance to this story was unclear. Whilst the overall delivery was good and effectively a showcase for what The Royal Ballet does best, it wasn’t really going anywhere, and I must confess to some relief when the palace was stormed at the end of Act II.

The inventive and haunting accompaniment to the final act provides the necessary contrast as this Anastasia is a lost soul, confused by her surroundings and haunted by her apparent memories: visited by her family; an imagined husband (Edward Watson); visions of Rasputin; and encircled by a firing squad. Osipova performs wonderfully, her staccato style capturing the anxiety and uncertainty of her character who doesn’t fit in. Whether we wish to believe her story, we are still emotionally drawn into her fractured vulnerability.

This is indeed the real story and the additional use of bright vibrant flashback from the first two acts would have provided the perfect further shocking contrast to the frenzied state Anastasia finds herself in. Ultimately after her death it was later proven through DNA analysis and subsequent finds that her story was untrue which negates the credibility of the opening two acts but importantly does not detract from the madness of Act III, the original ballet, and its powerful exploration of an imagined past. https://www.roh.org.uk/tickets-and-events/anastasia-stream-details