Both the press and public alike have been throwing heaps of praise at the Hope Mill Theatre in Manchester, with some even calling it the Menier Chocolate Factory of the north. Following their successful first in-house production of Parade earlier this year, tonight their latest offering HAIR had its press night. After seeing this show. I find myself asking if the Menier Chocolate Factory will soon be called the Hope Mill of the south!

The theatre have once again joined forces with Aria Entertainment to produce another astounding piece of theatre that will live long in the memory of the Manchester audiences. Designer Maeve Black has transformed the venue into a thrust stage arrangement bordered by grass verges and covered the walls with multi coloured ribbons attached to chicken wire. With the audience on three sides and the superb 5 piece band under the direction of Gareth Bretherton on the other it makes for a spacious, yet surprisingly intimate space. 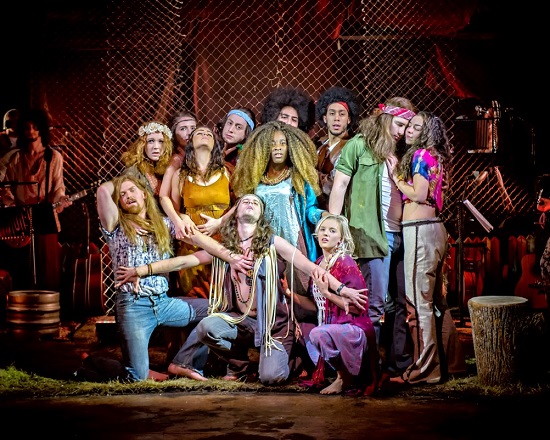 Premiered in 1967 HAIR is a rock musical which broke new ground when it opened in New York. With its anti-war message and its depiction of the use of illegal drugs, its treatment of sexuality, its irreverence for the American flag, and its nude scene caused much comment and controversy. Now in the 21st century it is still as relevant today as it was nearly 50 years ago.

Director Jonathan O’Boyle along with casting director Benjamin Newsome have drawn together some of the most talented performers I have seen on stage in a long time. Each complemented each other perfectly and there was not a weak link to be seen. Laura Johnson as Sheila, Robert Metson Claude, and making her second appearance at Hope Mill Shekinah McFarlane as Dionne shine vocally.

The choreography from William Whelton, also co-owner of the theatre, was mesmerising and provided interaction with the audience at every opportunity culminating in the audience being invited to join the cast on stage for the final song “Hippie Life”.

With one of the songs in the show titled “Manchester, England” it really feels like this show has come home to this vibrant city. Hope Mill and Aria Entertainment have once again produced theatrical gold and with a limited run until the 3rd December you really cannot afford to miss this show.