What I love most about Hope Mill Theatre is how versatile a space it can be. Every performance I've been to here has configured the staging area differently, and the set this evening, complete with graffiti and road signs, perfectly sets the scene for 'Monopoleyes'.

Writer Will Travis explores modern British society and austerity through this dark comedy, which depicts the elites playing a frightening game with us normal folk. The monopoly characters, named for their game pieces, are all deliciously over the top, and a stark contrast with the gritty Northern reality of Joe Bloggs and his family. It's like Coronation Street meets panto, and for the most part, works very well.

Verity Henry as Roller runs the show, and gives a very self-assured and smug performance as the leader of the elites. In contrast, Steve Cooper as down-on-his-luck Joe Bloggs gives a realistic portrayal of a hard-working family man, which is truly heartbreaking at times. Cooper's first entrance was inspired, and a fantastically worked comic surprise which I won't spoil for any readers!

I also enjoyed cheeky chappy Nathan Morris as Boat/Smith with his impeccable timing, and Joe Parker full of teenage angst as Andrew Bloggs, although Parker's Simpkins was lost amongst the stronger characters, and the Scottish(?) accent was decidedly dodgy. Susan McArdle was delightfully irritating as media mogul Hatter, and there was great physical comedy made of the height difference between McArdle's petite frame and the towering figure of Chris Brett.

I must also give a special mention to producer Elise Williamson who also played the role of Charity, giving a wonderfully tender performance particularly in the graveyard scene which was a monologue masterclass.

Despite some weird and wonderful accents and in-jokes, the show does what it sets out to do, and the metaphors about broken Britain are smoothly integrated into the brilliant writing, without being too contrived. Monopoleyes is a highly enjoyable production, with some very very dark moments, and makes you think about who is really in control. 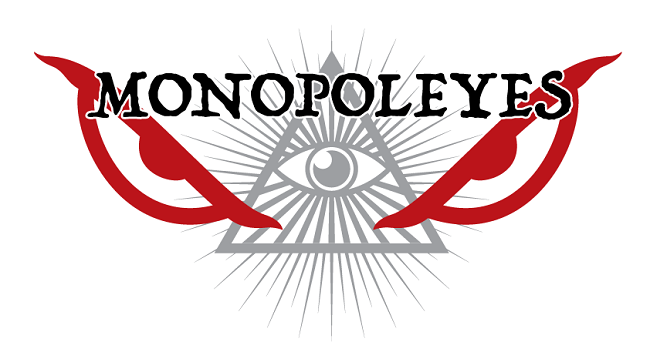