Once in a while you see a show that just simply blows you away.  Tonight Jesus Christ Superstar at The Palace Theatre was just that show.  From the first note of the powerful rock score to the last the show has you captivated.

Now classed at middle aged at over 40 years old the show shows no sign of its years and although regarded by some as a classic, it is still as fresh and relevant today as it always was back in the 70’s.  This latest production directed by Bob Tomson and Bill Kenwright and designed by Paul Farnsworth is a lot darker than previous incarnations, which adds to the drama of the piece.

Glenn Carter in the title role is quite simply stunning.  Having previously played the role both in the West End and on Broadway to huge critical acclaim he brings every ounce of his experience to this production.  If you didn’t know any better it could be Jesus Christ himself up on that stage.  His mannerisms and emotional commitment to the role can only be admired.

Rachel Adedeji as Mary Magdalene was also superb in her role.  With a delicate voice which when required exerted huge power, her struggle with her feelings towards Jesus was utterly believable.  Having previously appeared in Thriller Live in both the West End and on tour Entertainment Manchester predicts huge things for this understated talent.

Judas Iscariot played by Tim Rogers was the only slight weak point in the production.  His vocals at time seemed to be unnecessarily shouted and his diction was sometime difficult to decipher.  In saying that as with Carter, his commitment to the emotional side of the role was faultless, with Judas’s death played sublimely.

Missing from tonight’s performance was Rhydian Roberts as Pontius Pilate due to illness.  Johnathan Tweedie however, provided an able understudy with a confident performance in the role.  Tom Gilling as Herod has the eleven o’clock number in this production with the excellent “Herod’s Song”.  Camp isn’t the word to describe it, but just imagine nipple tassels, glitter and dancing girls!

Carole Todd’s simple but effective choreography, Dan Samson’s sound design and the orchestra under the leadership of Bob Broad all added to the spectacle on stage.  Special mention should be made to Nick Richings’s lighting design.  The moods evoked purely due to the lighting were some of the best we have seen in a long time at the Palace.

In short Jesus Christ Superstar is a gritty, emotional and powerful production that does justice to the music and lyrics penned by Andrew Lloyd Webber and Tim Rice.  If you get a chance to see this show in Manchester, do not pass it up! 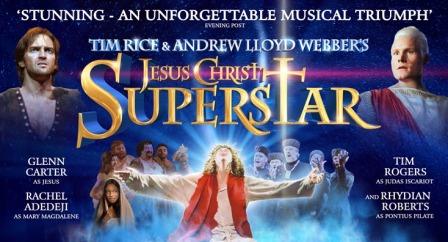