Although I am familiar with the work of Willy Russell, I had never seen Educating Rita before this performance at the Octagon Theatre in Bolton. To say it taught me a lot is an understatement. There is so much in this great play that it’s hard to know where to begin.

The role of Rita is one of strongest female characters in any production of the past 50 years. After all it was the role that made Julie Walters a household name. So, it was going to take a great actor to fill this role and Jessica Baglow certainly does deliver in the title role. She captures the chatty girl from Liverpool very well with bags of energy. In fact, having seen her play the part, it would be difficult for me to imagine anyone else playing Rita. However, there were times when I did feel like she was forcing the scouse accent and it didn’t sound natural.

What’s so great about this piece in particular is the message it carries - it doesn’t matter who you are, as long as you set your mind to something, and surround yourself with the right people you can achieve anything.

Much of the early scenes deal with the differences in culture between Rita and Frank (David Birrell) and are quite comical. In these scenes Frank is a bit unlikable as he comes across as middle-aged cynic who won’t give someone a chance.

However, the beauty of Educating Rita is that you can argue that Frank learns far more from Rita than she learns from him. As Rita blossoms, a new Frank begins to emerge and his outlook on life seems to improve.

The beginning of Act 2 sees remarkable change in the characters. Rita has been to summer school in London and comes back with a new look and more confident. Frank meanwhile starts to drink more than he did before.

Given the Octagon’s round theatre, the set worked well. However, there were a few moments I missed due to large props being in my eyeline, the main culprit being a coat stand that didn’t seem to serve much function during the performance, so I would raise questions over why it was needed on the stage.

It seems that the books and the office have become a place where Frank can hide his drinking problem from the world, and when Rita arrives and wants to know what’s in them it forces Frank to question what’s important in life.

Educating Rita will make you laugh, move you and make you realise that when the odds are stacked against you but you have hope and determination you can turn your life around and have your happy ever after. 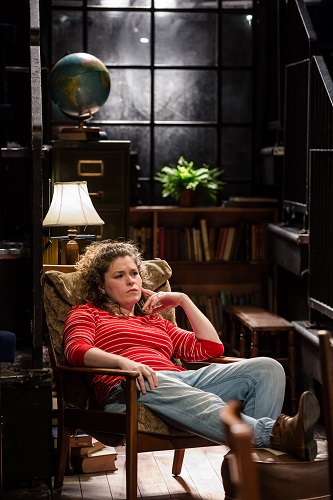