If there is one thing our modern world can't live without, it's the internet. With ideas, news, and people connected around the world, at just the click of a button, it is easy to imagine the power it holds to project thoughts and beliefs upon young individuals. With great power comes great responsibility, right? But are we responsible? Women competing to be the most followed, tweeted, and admired YouTube star, working to extreme lengths to achieve and maintain the right image. Welcome to Purge.

Written by Hannah Ellis Ryan, the Purge uncovers the fantasies versus the realities of preserving an online form that is born from anxiety, hunger, and the longing to "feel good enough". Ryan portrays the unsettling truths of Bulimia and Anorexia, and its affect it has on young girls trying to sustain an image that doesn’t belong to them. The play highlights the issues of mental health that comes with eating disorders, and the unhelpful onlooker telling them to "go and eat something", which is about as useful as a blind guide dog. 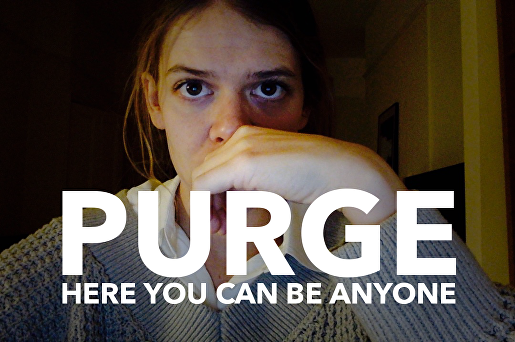 The pressure of perfection is illustrated by Sarah (Amy Du Quesne), as all her energy is consumed by her YouTube Channel. Her mother (Clare Cameron), cannot comprehend this "world" her daughter is so infatuated with, and so acts as the reminder of the real world, querying the influence of the internet. Her daughter changes her name, voice, and appearance, all to gain more followers, and so their relationship is tested and brought to question; do we really know our children?

Ryan isn't afraid to expose the distressing reality that we try to avoid by looking away; whether it has happened to us, or someone we know, it is a cold, harsh truth that lingers amongst us, and it is only in this play that I have seen that truly brings it to light.

A powerful journey of how social media influences four different women, played brilliantly by an energetic cast, and directed by the creative Heather Carroll. Purge is an intense insight of a somewhat lonely existence, raising concern over the wellbeing of online users, which, sadly, brings me back to my first statement. 'If there is one thing our modern world can't live without, it's the internet.'