Selladoor Productions new adaptation of Steinbeck’s most notable work was greeted by a healthy audience at its opening night at the Opera House in Manchester including a lot of younger faces. This may be because of its school syllabus popularity; I doubt there are many English students who have not spent time wondering how many metaphors Steinbeck could possibly cram into one book.

Having studied the piece myself it was a real delight to see the story brought to life by an energetic, committed and talented cast.

Set in the Great Depression of 1930’s America, the story follows George and Lennie, two migrant workers and unlikely friends. They travel from place to place in California searching for work and a better life whilst dreaming of a place to call home. A powerful and heartbreaking story justified in its relevance today by the current migrant crisis of which it is easy to draw many parallels. 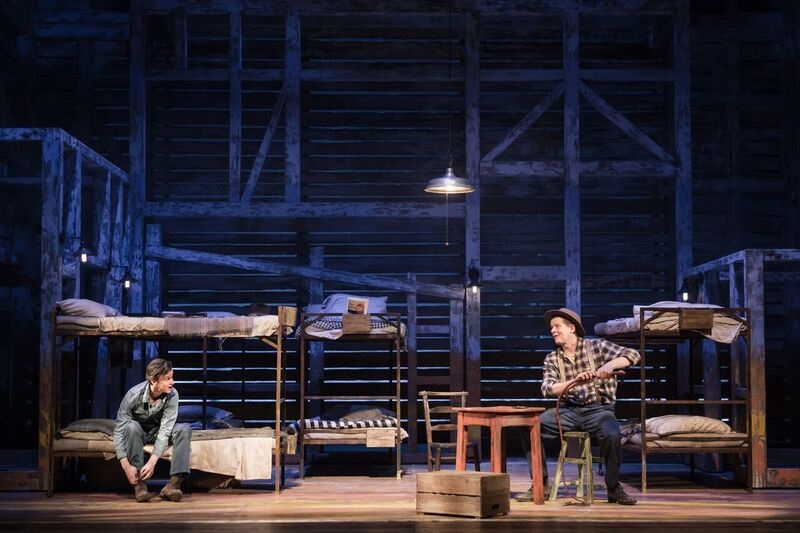 The set and lighting design worked effectively to create both indoor and outdoor spaces with atmosphere and ease despite its simplicity. I enjoyed the slightly abstract element to the design however felt that the sound design somewhat jarred with this. Use of loud and obvious sound effects and bursts of percussion heavy music were used at random intervals and seemed to break up the production rather than aid its flow. I enjoyed some of the music and movement sections but these should have been used throughout which would have assisted the pace of the show rather than feeling a little wedged in.

Richard Keightley and Matthew Wynn played a convincing George and Lennie, and their physical relationship compared to that of the rest of the men highlighted the social constrains on affection within male friendships. These two really look the part, they have great chemistry as a pair and their physicality is spot on however their accents often strayed into unusual territory which was a little distracting.

Rosemary Boyle as Curley’s wife gave a very grounded and sensitive performance. As the only woman in the cast her mistreatment was emphasised by the fact she contradicted all of the men’s accusations against her in a warm, honest and effortless performance. I only wish we could have seen more of her… But that’s classical theatre for you folks!

Other stand out performance’s included Andrew Boyer’s Candy whose journey broke my heart more than that of the main characters. You can tell this man is a seasoned actor; his stage presence and character work had the audience hanging on his every word.

Harry Egan as Whit also deserves an honorable mention. In what is one of the smallest and least influential parts within the show he stole every scene he was in with an original characterisation and much needed humour. He’s definitely one to watch.

With a bit more attention to detail and some work on the flow and pacing of the show, it could be brilliant. For me it just misses the mark.