The Crucible is a 1953 play by Arthur Miller. On the surface it is about the Salem witch trials of the 17th Century, but underneath it is an allegory about McCarthyism – a popular pastime in the ‘Forties and ‘Fifties – named after Senator Joseph McCarthy. (He must be so proud; not every senator gets turned into a noun.) McCarthyism refers to the hysteria and paranoia of the public accusing anyone and everyone of being “un-American” and specifically a communist, without any proof whatsoever. The Crucible was inspired by Miller’s own experiences.

Tonight’s play takes place in modern times. An effective raised set features abandoned technology, a mobile phone, a CD and other bits of gadgetry, seemingly discarded. Presumably the tech serves to reinforce the fact that this is a contemporary setting. 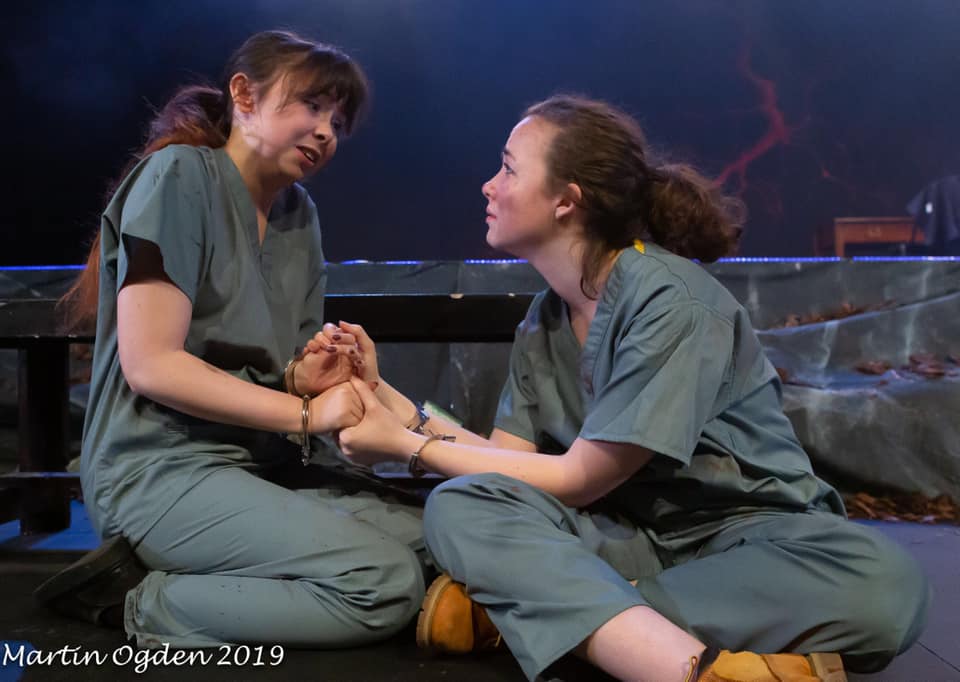 The opening scene sees the whole ensemble file onto the stage, all calling and crying out, in a bewildering cacophony. They then all file away again. It is quite chilling and certainly grabs the attention. The cast are all in modern clothes, but they speak in period dialect from 17th Century Salem, which seems an odd and rather jarring directorial choice.

The cast are all very talented. I found Oceana Cage, as the Barbadian servant Tituba, very convincing. Veteran David Beeby, here playing Reverend Hale, is always very dependable, but the whole cast attacked their roles with gusto and conviction.

There are some very chilling moments, such as what appears to be a group vision or possession, which is a kaleidoscope of wailing and shrieking and chaos, carefully orchestrated, perfectly timed and very well-acted. It really captures a feeling of insanity, terror and evil.

The lighting and sound are used to great effect. The stage is cast in demonic red every time there is a suggestion of something satanic afoot. The backing music is atmospheric and very powerful. At one point there is a sudden piercing audio scream, which has the whole audience jumping forward in their seats and then laughing nervously.

For some reason, the character of farmer, John Proctor, is turned into a woman (played very ably by Lara Hancox). She is married to a woman and they have children, so at first it comes across as if it is a woman playing a male role. However, in the second half Proctor is specifically referred to as a woman and it is clear they are in a lesbian relationship. This might have been intended to emphasise that this is – despite the archaic dialogue – set in contemporary times, but the point of Miller’s allegory is about the intolerance and fury of McCarthyism, and the fact that the god-spouting townsfolk and the clergy are so accepting of a lesbian marriage seems out of kilter with the accusing and intolerant world Miller was depicting. Things then become ludicrous when it’s revealed Mrs Proctor is three months pregnant. While everyone is accusing everyone else of witchcraft, an immaculate conception appears to have occurred.

My main criticisms are with the script itself. For me it is far too long and excessively wordy. The cast did so well to memorise the amount of dialogue. I feel the play suffers because of its length and the pacing at certain times, especially the first and final scenes. The quality of the cast isn’t in question at all and the sound and visuals are very well realised, but for me this script wasn’t the best to showcase the obviously gifted people on the stage.